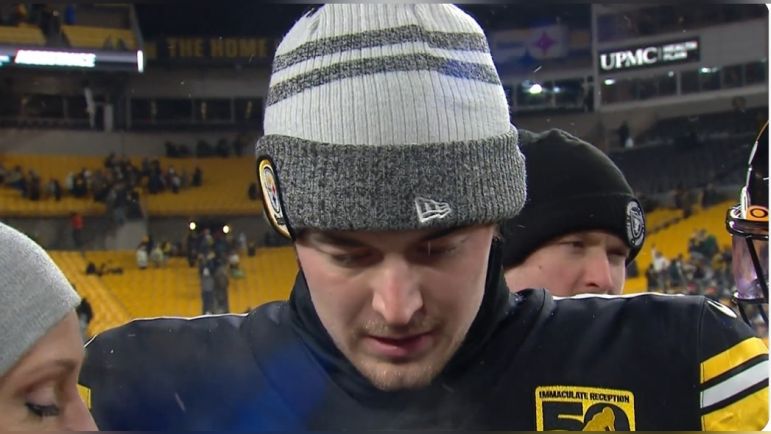 50 years ago, the Pittsburgh Steelers beat the Raiders 13-7 with a touchdown with under a minute to go.

Tonight, they did nearly the same, a 13-10 win with a touchdown with under a minute left. Instead of Bradshaw finding Fuqua/Harris, it was QB Kenny Pickett finding WR George Pickens for the game-winning score. And speaking to NFL Network after the game, Pickett tried to describe the moment.

“It’s an incredibly special night,” Pickett told NFL Network postgame. “Dedicated this game to Franco. We all wore his jersey in tonight. It felt like he was with us tonight. Definitely on that last drive you saw Najee making some great plays. So it was really special.”

"I felt like he was with us tonight."@kennypickett10 and the @steelers honored Franco Harris in the best way possible tonight. 🙌 pic.twitter.com/gg9Z7DwzOX

The entire Steelers’ team walked into the stadium with Harris’ #32 jerseys, honoring him on the night the team officially retired his jersey. It took until the bitter end of an equally bitter night, but Pickett led Pittsburgh on a game-winning drive, going ten plays for 76 yards. Pickett peppered RB Najee Harris with checkdowns while TE Pat Freiermuth made crucial catches. But Pickett found Pickens over the middle to give the Steelers their first lead of the game.

Pickett didn’t finish the game with sterling numbers but he made plays when the counted. And the Steelers’ defense played like they did back in the 70s, stifling the Raiders in the second half and holding them to zero second-half points. A total team effort on a night that meant everything to the Steelers, personally and professionally.

The Steelers still have a long road to make the playoffs. Technically, they can still be eliminated after this week if the Los Angeles Chargers and Miami Dolphins win over the next two days. But tonight, their winners. For themselves, for the city, for Franco Harris. It’s a night that won’t be forgotten anytime soon.