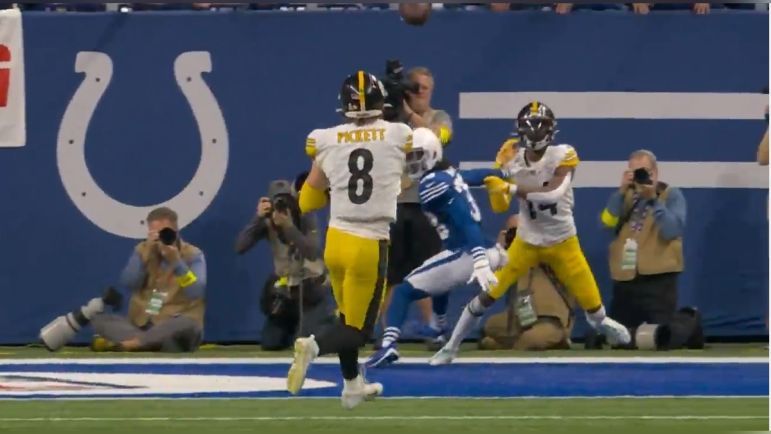 On Thursday, Kenny Pickett spoke to the media prior to the team’s Week 16 matchup at home against the Las Vegas Raiders Saturday night on Christmas Eve and spoke about being cleared from his concussion suffered against the Baltimore Ravens Week 14 and also how he has grown as a player the last several weeks as the season comes to a close.

When Pickett was asked about fellow rookie WR George Pickens and how their relationship is growing over the course of the season, Pickett noted that he and George communicate a fair amount on the field and he fully intends on being Pickens’ teammate for the foreseeable future.

“We’re two young guys in it, battling through our first season,” Pickett said to the media Thursday on video from Steelers.com. “We plan on being here a long time together, so that relationship will continue to grow. We’ll continue to build trust. It’s good talking to him on the field too when he was coming off and what I was seeing, what he was seeing, and continue that communication.”

While there have been moments where Pickett and Pickens haven’t been on the same page in terms of connecting on targets down the field or Pickens’ frustrations about his lack of involvement in several games this season, the two seem to have gotten along well in what has both been their rookie seasons. Pickett has defended Pickens in the past, stating that he admires his competitive nature and desire to be great.

While Pickett has shown a fondness of targeting TE Pat Freiermuth, Pickens is the wide receiver Pickett has had the most success throwing to this season on a per-target basis. Seeing significantly fewer targets than Diontae Johnson, Pickens and Pickett have hooked up on some impressive plays in 2022. That should only improve with more chemistry together throughout the rest of the season with three games left to go into 2023 where both rookies should look to take a step forward as the hopeful future foundation of the Pittsburgh Steelers passing game.