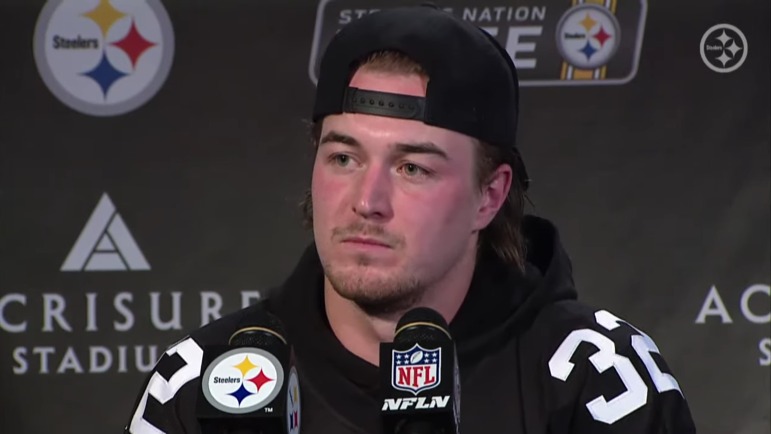 Before a successful fourth-and-one quarterback sneak in the first half, the Pittsburgh Steelers honored Franco Harris by using “Franco” as a snap count. Harris unexpectedly passed away earlier this week, before his jersey retirement ceremony and the 50th anniversary of the Immaculate Reception, the play he made that turned the tide of the Steelers as a franchise. Rookie quarterback Kenny Pickett explained the Franco snap count in his postgame press conference today.

“It was a dummy count until I said Franco, and then I was going to be live. We had that in, it was special to convert. We had it twice, we didn’t do it a second time because obviously they heard it the first time so I didn’t want to do it twice. But it was cool to have that in for him this week,” Pickett said in his postgame press conference via the team’s YouTube channel.

The Franco count came on Pittsburgh’s lone scoring drive of the first half, with the team facing 4th and 1 from the Las Vegas 30. Pickett converted the QB sneak after a failed fullback drive, with a little help from Miles Boykin pushing him from behind. The Steelers would end the drive with a 44-yard Chris Boswell field goal with 1:49 to go in the first half to cut the Las Begas Raiders lead to 7-3. It ended up being a big score in the game, as the Steelers won the game by three at 13-10.

It was a windy, cold, night in Pittsburgh where neither the Steelers or Raiders offense could get going. While it was a lot colder in this instance than it was on December 23, 1972, the Steelers managed to beat the Raiders 50 years and one day to the game where Harris made the play that made the Steelers into the Steelers. And they did it by scoring 13 points, the same total they scored against the Raiders in the 1972 divisional playoff.

I think Harris would’ve been proud of the Steelers fight tonight, and the snap count in his name ended up being a huge play in the game. It was great to see the Steelers win tonight for Harris and to keep their playoff hopes alive.