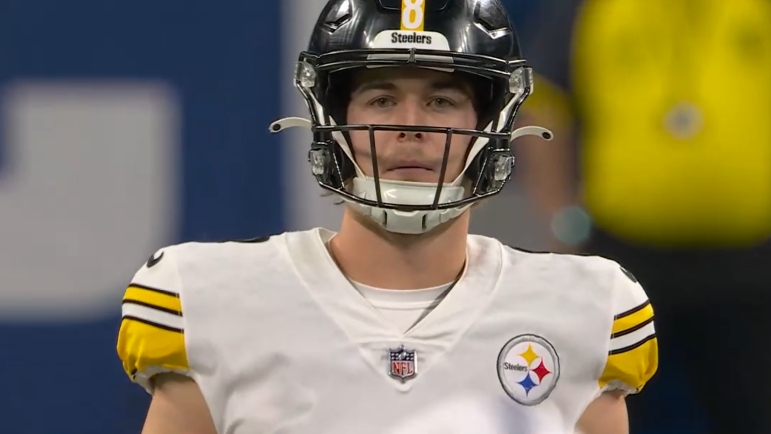 After suffering his second concussion this year in the Pittsburgh Steelers Week 14 loss to the Baltimore Ravens, Steelers rookie quarterback Kenny Pickett has changed his helmet on the advice of doctors. Pickett is now wearing a Riddell Axiom, a slightly larger helmet that’s meant to improve player safety. Steelers tight end Pat Freiermuth also switched to a larger helmet after he dealt with two concussions his rookie season, and now Pickett is doing the same. The quarterback talked about taking the advice of doctors in his press conference today.

I’m 50/50 on these new helmets, but it looks good on him. pic.twitter.com/JsbSdLqiBW

“They suggested it, the doctors did. They said they had really good results with it. So, I trust what they say a hundred percent, so I definitely want to be safe,” Pickett said via a video posted to Steelers.com.

He also talked about getting used to it and making sure the facemask didn’t affect his vision.

“It felt the same. It was just, obviously, getting the face mask right was the big concern for me. Just, you know, being able to see clearly, not having the two bars, the lineman bar, I wasn’t a fan of that one. You know, I had a visor when I was younger, so I’m going back to the old Pop Warner days.”

The Axiom was announced last January and released in Fall 2022. Riddell says the helmet is “designed to improve impact response and reduce Head Impact Exposure.” It’s also the only football helmet equipped with Riddell’s InSite Impact Response System, which measures the head impact each person wearing the helmet deals with while wearing the helmet. Pickett said the helmet has a Speed Flex, which is a design by Riddell to disperse energy and reduce trauma, in the back of the helmet to protect the back of Pickett’s head, which is where he hit after getting slammed to the ground on both of his concussions.

“Not really getting hit from the front, but slamming my head off the ground is what has been the issue. So, it has the Speed Flex in the back, which I think will help me out,” Pickett said.

Obviously, any change that Pickett and the team doctors feel can keep him healthier is a positive change. Concussions are scary, and two in one season is no joke. The Steelers were at the forefront of head injury protection when the whole team wore guardian caps during Minicamp, despite them only being league-mandated during training camp. With Pickett suffering multiple concussions this year, it’s a good time to make a change to a safer helmet that could potentially help prevent another concussion in the future.

As far as getting used to new equipment, it can be an adjustment, especially a helmet. Still, Pickett sounds confident that the helmet won’t be much of a change, although the added visor will be noticeable. Pickett said the visor is just to make sure he doesn’t get hit in the face because the new helmet has a wide gap in the face.

“Like, I don’t know like who designed this one, but it’s just a little too wide where a fist can literally go through it. So, I don’t want to get punched in the face on Saturday, so I was like, you know what, I’ll probably wear a visor and we’ll be good to go.”

It more than likely won’t have any impact on his play, and it will keep him safer and healthier and hopefully, Pickett won’t suffer any more concussions regardless of what helmet he’s wearing.

Pickett’s new helmet and visor will make their debut on Saturday night when the Steelers play host to the Las Vegas Raiders at 8:30 p.m. at Acrisure Stadium.