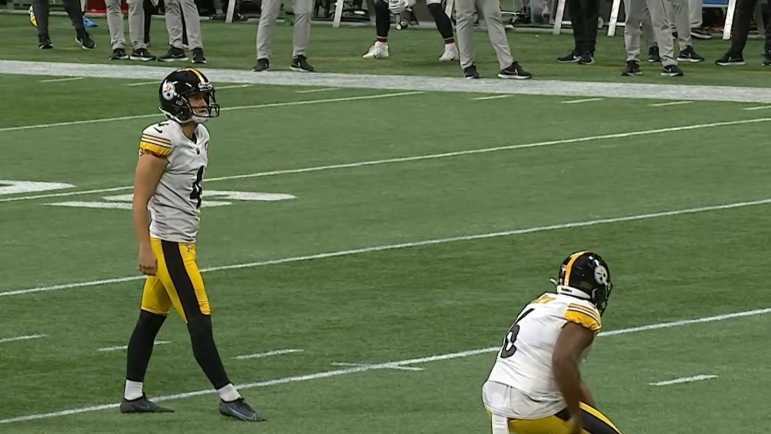 The Pittsburgh Steelers got their second straight win Sunday in Atlanta, winning a close one against the Falcons 19-16. The Steelers held a 19-6 lead late in the third quarter, but the Falcons managed to get the ball in the end zone and get the ball back to potentially take the lead. However, the defense held strong as Pittsburgh downed Atlanta on their own one-yard-line on an impressive punt by Pressley Harvin III with S Minkah Fitzpatrick calling game the very next play on an interception to end the game and secure the victory.

DL Cam Heyward took the stand for the post-game press conference interview and was asked about what’s been going right lately during Pittsburgh’s two-game winning streak to which Heyward bluntly answered that the team is just winning, but also commended the work of the kick coverage team this week and K Matthew Wright.

“One real key that I want to just point out too is the kickoff coverage,” Heyward said to the media Sunday during his post-game press conference which aired on the team’s YouTube channel. “You’re going against Cordarrelle Patterson. Matt Wright moved the ball around the field and didn’t let them really get into a rhythm, and I thought that was very big because they get a lot of hidden yardage in that.”

The Falcons totaled 55 yards on three kick returns in the game (18.3 YPR) with Patterson never touching the ball. On the season, Atlanta has averaged over 26 yards per return on kickoffs with Patterson fielding eight kickoffs for 268 yards (33.5 YPR) and a return TD.

HC Mike Tomlin gave a ton of credit to Patterson on The Mike Tomlin Show which aired yesterday, calling him a dynamic kick returner who now holds the NFL record for kick return TDs in his career.

Keeping Patterson from potentially wrecking the game was a huge win for Pittsburgh as K Matthew Wright has filled in admirably for Chris Boswell who has been hampered with a groin injury that landed him on IR. Boswell appears primed to come of IR next week in-time for Pittsburgh’s matchup with the Baltimore Ravens, but Wright has more and adequately filled in, making all ten of his last field goal attempts with going 12/14 overall in four games with the team this season. On top of that, he was able to play keep away from Patterson, taking his impact on kickoff out of the game.

Heck of a half for Matthew Wright. Three makes from 45+ yards out with great accuracy on kickoffs.

Excited for Chris Boswell's return but after a crummy Saints' gam, Wright has been solid. #Steelers

The kicker is usually the unsung hero that doesn’t get the glory for doing his job but will get crushed when he does mess up. Thankfully for the Steelers and for Wright, he has executed at a high level the last four weeks, drawing praise from Heyward, Mike Tomlin, and others on the team for the impact he has made filling in for one of the league’s best.