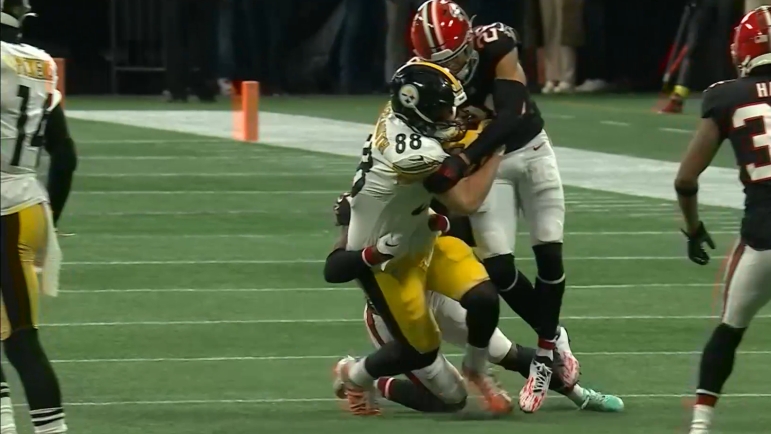 When former Pittsburgh Steelers quarterback Ben Roethlisberger needed a big first down, chances are he was turning to the reliable Heath Miller.

All these years later, when rookie quarterback Kenny Pickett needs a completion to move the chains, he’s turning to his sure-handed, tough tight end in Pat Freiermuth more often than not.

Steelers rookie Kenny Pickett doing a great job working from one side of the field to the other on third down and hitting Pat Freiermuth for a first down.

Pickett has looked far more comfortable over the last few games as the Pittsburgh offense has found more of a rhythm. pic.twitter.com/iJw9aeus52

Against the Atlanta Falcons Sunday at Mercedes-Benz Stadium, Pickett hooked up with Freiermuth just three times, but all three came on third down and moved the chains in crucial situations, helping the Steelers sustain drives and march down the field.

Pickett hooked up with Freiermuth on 3rd and 3 for 10 yards and 3rd and 8 for 9 yards on the opening drive, then found him on 3rd and 4 on the third offensive drive of the game, which Freiermuth broke two tackles on and raced 57 yards down the left sideline to set up the Steelers at the Falcons 12 yard line.

Outside of the three catches, Freiermuth was also targeted on 3rd and 15 on the first drive which resulted in a field goal, and 2nd and 11 on a throw up the seam that should have been a touchdown.

More often than not, Pickett is looking 88’s way when it comes to the money downs. For Freiermuth, that’s more of a feel thing between the two, which shows how strong their chemistry is together.

“He just knows were I’m gonna be, and he has trusted me and I’ve trusted him,” Freiermuth stated to reporters regarding the third down chemistry, according to video via Steelers.com. “He knows kind of where I’m gonna be and it’s just a feel thing. I’m excited for that growing opportunity for us.”

Some of the best connections in the history of the sport have been more about feel than about scheme or anything like that. The best combinations have a general understanding of each other, have a feel for what the other is going to do in certain situations, and generally has a great nonverbal connection on the field overall.

In big spots, that’s what Pickett and Freiermuth have at this point, which is rather remarkable considering they’ve only been together for eight games. While they’ve spent time together in the offseason, the chemistry between the two on the field has developed at a rapid pace, and that’s a tremendous sign moving forward for the black and gold on the offensive side of the football.