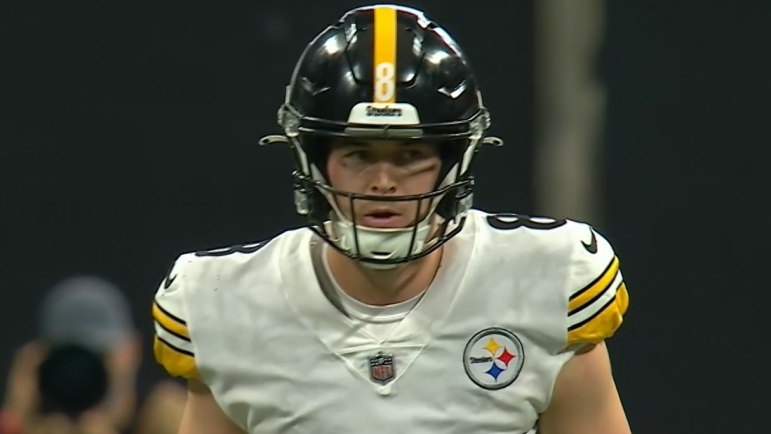 Pickett’s play of late has begun to turn the heads of fans and analysts after many wanted to write him off after a difficult start to his career. One of those analysts whose head is being turned is CBS Sports’ Cody Benjamin. Benjamin has been rightfully critical of Pickett throughout the year in his weekly quarterback ranking articles, but this week has Pickett jumping three spots to 25.

“Progress,” Benjamin wrote. “That’s all they’re looking for in Pittsburgh, and Pickett has provided that. The bar is low for scoring production, partly because he’s been so erratic in their conservative offense, but the guy stands tall even when circumstances aren’t ideal, and his touch is occasionally pretty.”

Pickett has certainly made progress. Since the bye week, Pickett has a passer rating of 85.9 and has not turned the ball over. This is a big difference from before the bye week where Pickett was getting killed in the media for his turnovers (nine total).

While the touchdowns aren’t there yet, he is doing a good job of helping move Pittsburgh down the field. Once he figures out the red zone, Pickett will jump even higher up Benjamin’s list.

CBS Sports was not the only place to take notes of Pickett’s play. Marc Sessler of NFL.com also released a QB index today, and he also had Pickett moving up three spots. This week Pickett landed at #22 in the rankings due to the improvement he and the Steelers offense have had in moving the ball down the field.

“Three of Pittsburgh’s biggest yardage outputs have come in their past four games” Sessler noted. “Same goes with points scored, first downs and yards on the ground. Rinse and repeat with Pickett’s yards per attempt and passer rating, while the young starter set a franchise rookie record Sunday with 128 straight throws without a pick. Pickett is growing weekly inside an offense featuring a gaggle of players on their first NFL contracts.”

Sessler references that the Steelers offense is very young, especially at the skill positions. Pat Freiermuth, Najee Harris, and George Pickens are all on their rookie contracts, while Diontae Johnson just got his second contract this offseason. It is not just at the skill positions though, as both Kevin Dotson and Dan Moore Jr., two offensive lineman on the left side of the line, are both on their rookie contracts as well.

Pickett has been thrown into a completely different situation than both Ben Roethlisberger and Mason Rudolph were. Both of them played with a veteran line and a skill position group that consisted of many veterans. Pickett does not have that luxury, yet he is still doing pretty well all things considered, especially since the bye week.

Steelers fans have to be happy with the way he has been developing of late, and even if Pittsburgh does not make a late playoff push, if Pickett keeps developing down the stretch, there will still be a huge positive to take away from this season.