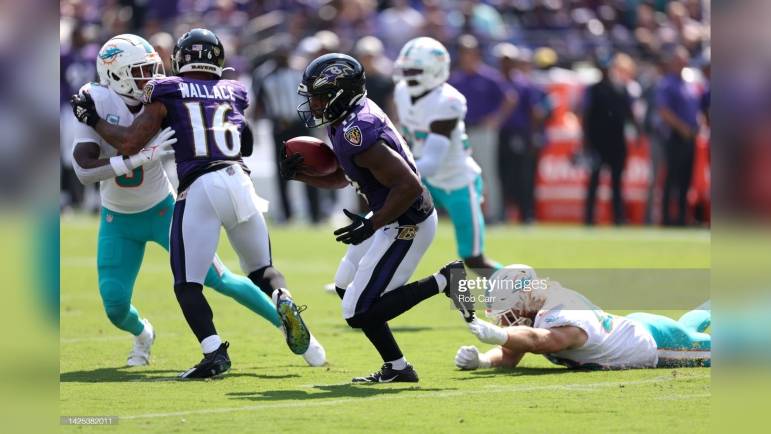 Baltimore Ravens All-Pro return man Devin Duvernay recorded a 103-yard kick return for a touchdown back in week two against the Miami Dolphins. Since then, he’s only had two returns go for longer than 25 yards, with a long of 33.

While he’s averaging 26.9 yards per kick return on the season, that number drops to a pretty pedestrian 20 yards per return even since his touchdown. He hasn’t had a return go for more than 23 yards since October. But head coach John Harbaugh isn’t worried, nor does he put the blame on Duvernay.

“We had a good scheme kickoff return-wise. It gets tougher later in the year to do that. We kind of plan for this time of year to get some kickoff returns. We work for it”, he told reporters earlier in the week as they prepare to face the Pittsburgh Steelers for the first time in 2022.

As a team, the Ravens rank eighth in the NFL on the year for kick return average at 24.1, but they’re also one of only three teams in the league with an outlier return for a touchdown, and it’s been a long time since that happened and doesn’t reflect how they’ve performed lately. Harbaugh concedes it’s a work in progress.

“We work really hard at picking those things up”, he said about scouting opponents’ tendencies to exploit them. “We can break kickoff returns. It’s always a matter of how you block them. So, we’ll just keep working on those things. We have a lot of young guys out there. We play a lot of rookies, a lot of second-year guys on our whole team right now. So, there’s always that process of just experience, and learning from it and trying to improve everything we do”.

Duvernay returned 21 kicks as a rookie in 2020 for 578 yards, averaging 27.5 yards per with a touchdown. He made the All-Pro list as a return man last year (including a league-leading punt return average) with 676 kick return yards on 28 returns, though he failed to break one and averaged 24.1 yards per.

So far this season, he’s only had 12 shots at returns, but fortunately for him, one went for 103 yards, so that makes the 220 return yards he has on his other 11 returns look much better, boosting his average by nearly seven full yards per return.

Of course, the Steelers have been allowing 25.3 yards per kick return this year, the league average being 22.1. But they did a good job of controlling the Atlanta Falcons’ fourth-ranked kick return unit on Sunday, so perhaps they are up for the challenge after the lapse two weeks ago in Indy.