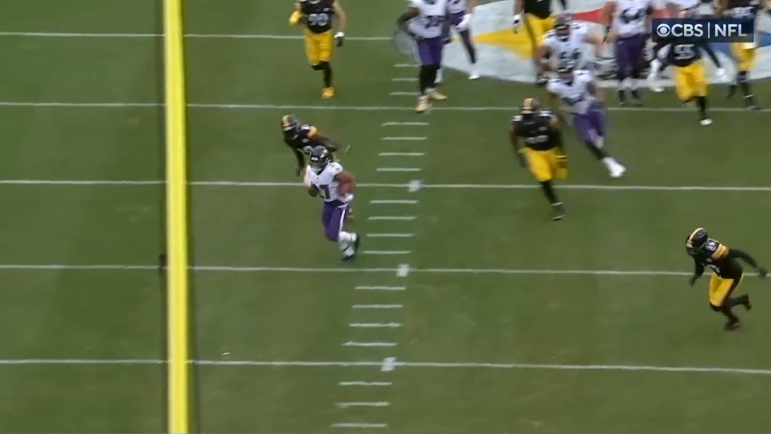 With the season practically on the line, the Pittsburgh Steelers suffered one of their toughest losses to date, which also happened to be against their biggest rival in the Baltimore Ravens. The Steelers shot themselves in the foot, turning the ball over on three promising drives and getting a field goal blocked. Despite that, they had a chance to win the game late, but their shaky run defense ultimately cost them the game in the fourth quarter.

According to a transcript provided by the Ravens, head coach John Harbaugh noted success in their inside gap schemes against Pittsburgh as the turning point in the fourth quarter.

“I think the inside ruining gap schemes were good,” Harbaugh said when asked what changed in the Ravens’ offense in the fourth quarter. “We had a really good job with our combinations from our guards and our tackles, tight ends and tackles. And the inside zone stuff was really good, too. We weren’t looking at quarterback-driven stuff. That was an old-fashioned run game. Our offensive line, tight ends, fullback power, guard, running backs did a great job.”

Coming into this game, the Steelers ranked in the top ten in run defense, which is a big step up from being dead last in the NFL last season. However, the unit today looked like the dead-last ranked unit last season, allowing 215 yards to an offense that rotated a backup quarterback and an undrafted rookie.

The run defense was especially costly in the fourth quarter, when the Ravens ran the ball for a 13-play, 57-yard drive that took nearly eight minutes off the clock and extended their lead to 16-7. After the Steelers scored, the Ravens iced the clock win three runs that everyone at Acrisure Stadium saw coming.

In the fourth quarter, the Steelers’ defense was facing an undrafted rookie in Anthony Brown, a golden matchup for them with the game on the line. However, the Ravens imposed their will on the Steelers’ front en route to an impressive victory on their part.

The Ravens wisely ran the ball away from defensive end Cameron Heyward, instead attacking the middle of the Steelers’ front. With the team’s playoff chances at less than 1% now according to the New York Times’ playoff simulator, this raises the question of whether the interior of that defensive line is among their top needs in the offseason.

The fact is, the Steelers have not looked the same since the retirement of defensive end Stephon Tuitt, as he was a perfect complimentary player for Heyward. While Larry Ogunjobi, DeMarvin Leal, and Chris Wormley are not terrible by any means, having a dominant line is essential for the Steelers’ identity, and it’s something they have missed since Tuitt stopped playing in 2020.

When Tuitt and Heyward played together in 2019 and 2020, the team had elite defenses, which is not a coinsidence. As crushing as this defeat was, the question of whether the defensive line should be one of the team’s priorities must be asked.