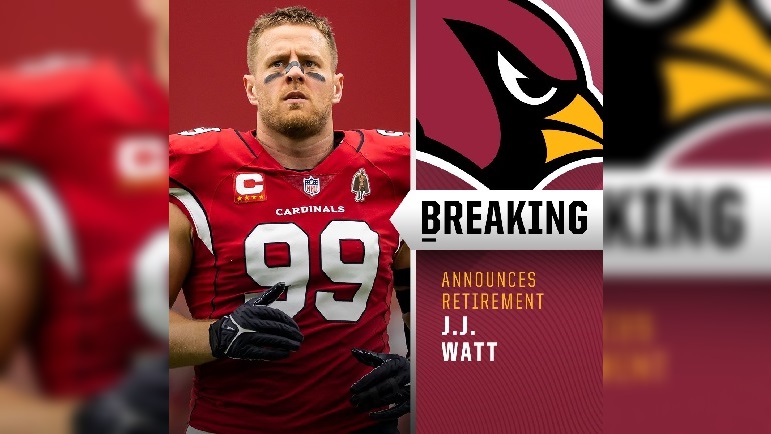 If you were holding out hope for a T.J. Watt/J.J. Watt reunion someday, I have some bad news for you. Moments ago, J.J. Watt tweeted that he’ll be retiring after the Arizona Cardinals’ season ends in two weeks, hanging up his cleats after an incredible career through a second act that has been marred by injury.

My heart is filled with nothing but love and gratitude. It’s been an absolute honor and a pleasure.

Here was an emotional Watt coming off the field after their OT loss to the Tampa Bay Buccaneers.

J.J. Watt tearing up the other night after game in Arizona #NFL pic.twitter.com/6Vh68YkEnN

And T.J. Watt posted an Instagram story responding to his brother’s news.

T.J. Watt on IG on brother J.J. Watt announcing Tuesday AM he is retiring after season #Steelers #NFL pic.twitter.com/QcLzhhuE0J

But injuries limited him to just eight games across 2016 and 2017. He would come back for another great year in 2018, finishing with 16 sacks before again dealing with injuries in 2019. He’d spend just one more year in Houston before being released and signing with the Arizona Cardinals in 2021. After a quiet first season, Watt’s come on strong in 2022, recording 9.5 sacks, the most he’s had since that ’18 season.

With two games to go, Watt has 111.5 career sacks, a number that would’ve been significantly higher had he stayed healthy. A five-time Pro Bowler and five-time All-Pro with a colorful trophy case, he’s sure to end his career in the Hall of Fame and will likely do so on the first ballot.

Watt is, of course, T.J.’s older brother with T.J. having similar success J.J. has had. They’ve made up an elite pass rush pair of brothers with nearly 200 total sacks between them… and counting. But starting next year, there will be only two Watts in the NFL, Derek and T.J.