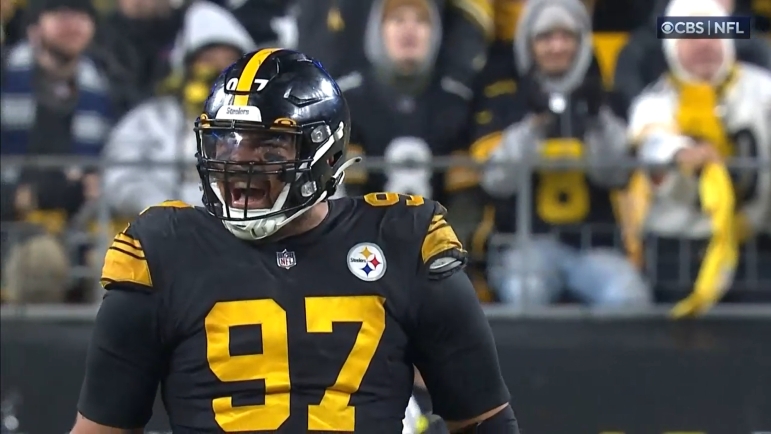 For the fifth time in his illustrious career, Pittsburgh Steelers team captain and All-Pro defensive tackle Cameron Heyward is up for the prestigious Walter Payton Man of the Year award.

While the honor of being a nominee is nothing new for the Steelers’ star, the feeling of being recognized for his play on the field and his efforts within the community off the field doesn’t get old for Heyward, who was surprised by former Steelers great and Pro Football Hall of Fame running back Jerome Bettis Tuesday at the UPMC Rooney Sports Complex to announce Heyward as the Steelers’ nominee for the award.

Appearing on his podcast, the Not Just Football w/ Cam Heyward Wednesday, Heyward spoke about what the nomination meant to him, and how special it would be to win the award this season, especially after his off-the-field efforts with Craig’s Closet, Little Free Libraries and Cam’s Kindness Week this season, as well as a Teacher Appreciation Dinner during training camp.

“It’s probably the best award out there, to be honest with you,” Heyward said to co-host Hayden Walsh regarding what it would mean to win the award. “I know Super Bowls are one thing and MVPs, but the Walter Payton Man of the Year, because it reflects not only on your play, but who you are off the field, it’s probably the most coveted award in our game today.

“It’s the best award individually. Obviously I work towards Super Bowls and I bled, sweat and shed tears for this game, but the Walter Payton Man of the Year is something special.”

A Steelers team captain for eight straight seasons, Heyward kicked off his community service this season by hosting a Teacher Appreciation Dinner during training camp, donating $10,000 to help teachers fund their classroom projects. During his career, Heyward has funded over $50,000 worth of classroom projects for teachers.

The Steelers’ star defensive lineman also organized a “Cam’s Kindness Week” ahead of the Week 4 matchup against the New York Jets.

During “Cam’s Kindness Week” Heyward organized daily acts of kindness to give back to the Pittsburgh community ahead of the matchup with the Jets, which included a visit to Children’s Hospital where he hosted a “What’s in the Box” game show with children and hospital staff inside the Dream Big Studio. Then, Heyward visited the Little Libraries and announced the expansion of Craig’s Closet.

Later in the week, Heyward read a book to children from the McKeesport Presbyterian Church’s Head Start program and then painted the newest installation of his own Little Free Libraries, which is part of the Rufus and Judy Jordan Literacy Project, aimed at promoting children’s literacy and honor Heyward’s late grandparents, who were longtime educators in the Pittsburgh area.

“Walter Payton was a great football player on the field, but a better man off the field,” Heyward said. “The lasting impact he had for those around him will live on for generations. I’ve gotten a chance to interact with his family before, and every time that I do it’s like I’m talking to my own family.
“….The guys who have won it, they play with their hearts on the field, but give their hearts off it. They make sure they give back to their communities. Everybody has a different story, and the other 31 men I’m nominated for this award with, they’ve done great things as well, so it’s always a pleasure to give back.”