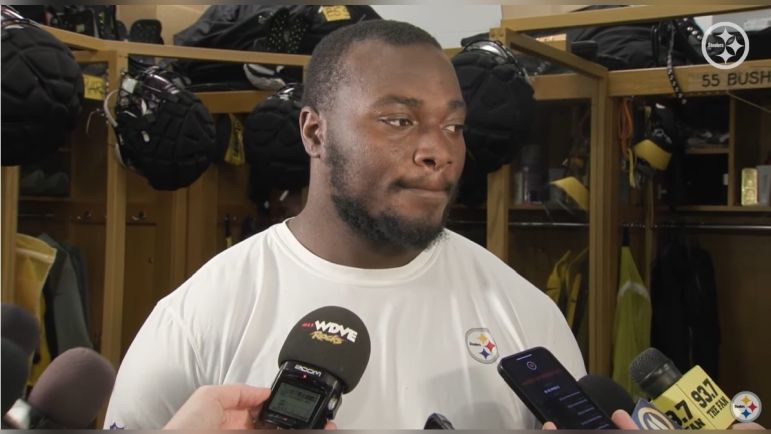 Steelers defensive lineman Montravius Adams spoke with the media today via the team’s YouTube page and was asked if after the last two games he expects teams to try and run on the Steelers.

“Always, it’s a copycat league,” Adams said. “Atlanta did a pretty good job, last week [Baltimore did] a pretty good job. Now it’s just up to us just buckling down. Now we got guys that’s been developing like [Chris Wormley] that’s out. So it’s really going to come up to the younger guys, come to us veteran guys, everybody just coming together and just keep pushing.”

In their last two games, the Steelers have given up a combined 361 yards on the ground, with 215 of those yards coming against the Baltimore Ravens on Sunday. The Ravens ran at will all game and on the final drive of the game, despite knowing the Ravens were going to run, Pittsburgh could not get a stop and allowed them to pick up the game-ending first down.

This week, the Steelers will be facing the Panthers who run the ball 48.2% of the time which is eighth highest in the NFL. Pittsburgh will also be without Chris Wormley this Sunday as he has been placed on injured reserve with a torn ACL.

As Adams mentioned, given the lack of success in defending the run recently, coupled with Wormley’s injury means that the team has to be ready to defend the run. Without Wormley, expect Isaiahh Loudermilk and DeMarvin Leal to see more snaps this weekend. Also, look for new signing Jonathan Marshall to see some playing time as he has just been signed off of the Jets practice squad to help the Steelers out.

The good news for Pittsburgh is that they have been a pretty good run defense overall this season. Despite the two bad weeks in a row, Pittsburgh is still a top-15 rushing defense, allowing 115.8 yards per game. They are certainly capable of stopping the run, and after a tough loss, this Sunday expects them to be on their A-game in Carolina.