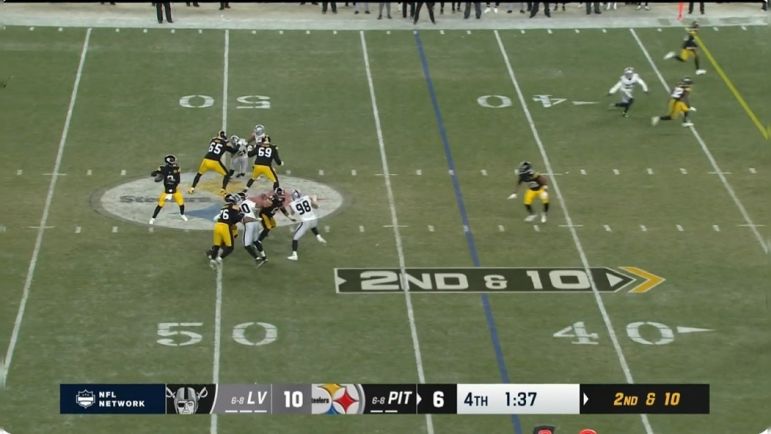 If the term “Steelers’ Football” has any meaning, tonight was the prime example. The temperature in Acrisure Stadium was 10 degrees Fahrenheit, or -12 degrees Celsius. The frigid conditions produced a classic defensive game that the Pittsburgh Steelers’ franchise is known for. When asked about the weather conditions during the post-game interview, quarterback Kenny Pickett was sure to give his gratitude to the support staff.

“It wasn’t too bad,” Pickett said when asked about the weather conditions according to the team’s YouTube channel. “I think our support staff, shout out to them, did a great job of having the jackets on deck. They had the boys and me with some hand warmers, so they were hooking it up on the sidelines. So I appreciate the equipment staff and all the trainers that we have, they got us ready to go.”

Coming into the league, there were more than a few questions about how Pickett would hold up in cold games. Though he grew up in New Jersey, Pickett previously admitted that he is not a fan of the cold weather. This was put to the test today, and he did just enough to win the game.

Pickett does not have a bad record in cold weather conditions. He played well in a rainy and windy 2020 game against Virginia Tech, passing for over 400 yards and two touchdowns. He also threw for 350 yards to beat NC State in 2019 in a rather cold game. That said, the former game was 46-degrees, and the latter was 36, making this his biggest career weather challenge by far.

Pickett’s stat line was commendable, as he went 26/39 for 244 yards, an interception. Most importantly, however, he had the game-winning touchdown throw to fellow rookie George Pickens. Pickett also outplayed veteran Las Vegas Raiders’ quarterback Derek Carr, who threw for 174, one touchdown, and three interceptions. Pickett also had an 81.6 passer rating, compared to Carr’s 42.2.

All things considered, Pickett did not play bad at all. An 81.6 passer rating is not terrible for Pickett’s coldest career game, especially given that he is a rookie. While the offense left much to be desired, Pickett played well when it counted most. A game-winning drive with the pressure of playing at home in a historic game is not something that any quarterback can put together, and this was arguably one of Pickett’s best games of the season.

If Pickett is going to be the Steelers’ franchise quarterback, he better get used to playing in games like this. Indeed, the team will certainly hope to play many games with Pickett at the helm in Acrisure Stadium in January, when the weather is at its coldest in Pittsburgh.

The Steelers will keep their playoff hopes alive, which are now at 2% according to Fivethirtyeight. This victory will not be forgotten for a long time, and it’s one that Pickett can build off.