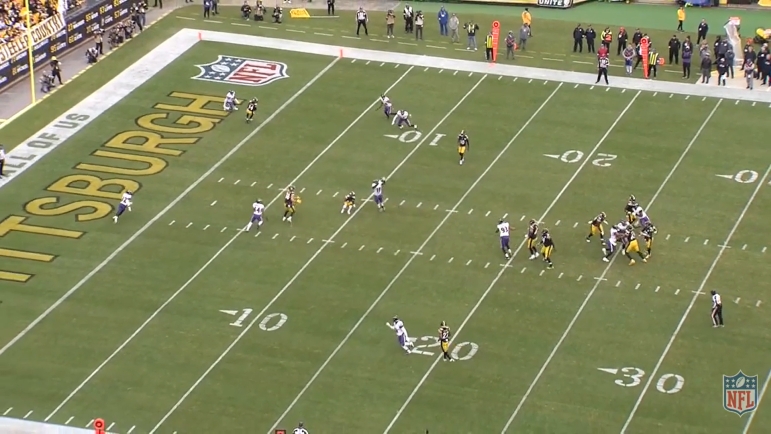 It’s generally rare for quarterbacks not to take the blame for something that happens on the field, and it’s pretty much never a good look when they don’t. Part of the job of being a leader is wielding ultimate responsibility for all successes and failures, and that includes accepting blame that might not rightly be yours.

While Pittsburgh Steelers quarterback Mitch Trubisky is certainly responsible for throwing three interceptions in Sunday’s game, it takes more nuance than that to explain how each of the three occurred. And the first especially had a lot going on that he couldn’t control.

While he was asked after the game if wide receiver Steven Sims ran his route improperly and he suggested that he didn’t think so at the time, it was clear upon review after the fact that he had. And he admitted as much on Monday, speaking to Brian Batko of the Pittsburgh Post-Gazette.

“I just should’ve went under, in front of him, rather than behind him,” he told the reporters when he was asked about how he played against Baltimore Ravens linebacker Roquan Smith, who intercepted the pass, in coverage. “I kind of got caught up in getting my initial depth coming off the ball.”

He added that he appreciated Trubisky bearing responsibility for the interception, “but it was definitely my fault.”

Sims was not the target on the play but was responsible for running a clear-out route underneath the intended target, which was to tight end, Pat Freiermuth. As you can see from the end zone view below, the Ravens did successfully jam him at the line of scrimmage with cornerback Marlon Humphrey, delaying the progression of his route.

By the time he was in the spot he was meant to be in, Sims has already reached the same point. Smith directed George Pickens upfield and impeded Sims’ progression, the receiver deciding to split the defenders, running behind the linebacker, which encouraged Smith to drift into the target area at the proper depth.

Still, the ball ultimately came out of Trubisky’s hands and his head and eyes were telegraphing where the ball was going to go. Smith was clearly reading him and made it an easy play, not needing to know where Sims was behind him at that point.

So Sims can take all the blame that he wants, but at the end of the day, it’s at least a shared blame. There’s no guarantee that Smith wasn’t going to make that same play even if Sims cut under and in front of him instead of drifting behind. Trubisky needs to see that and adjust, especially after seeing Freiermuth getting jammed.