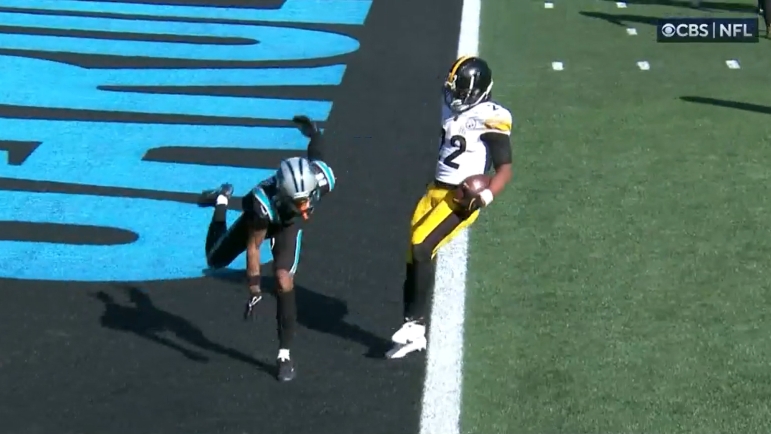 The Pittsburgh Steelers ran the ball 45 times during Sunday’s win over the Carolina Panthers, churning away for 156 yards on the ground. They might not have dazzled with efficiency—just 3.5 yards per carry—but there was enough effectiveness and situational success within those numbers to get the job done.

With starting quarterback Kenny Pickett sidelined, Mitch Trubisky got his first start of the season since week four. He did his part, but it was the run game that steered the ship, something that he told reporters after the game was the gameplan going in.

“I thought our whole offense ran through the run game today”, he said via the team’s YouTube channel.

“It was an emphasis this week that we were gonna pound the ball, lean on that o-line and the run game, and they did a great job creating holes for the running backs, and it makes my job easier”.

The Panthers themselves have been one of the hottest rushing offenses in the leagues in recent months and the defense did a phenomenal job putting a cap on that, limiting them to just 21 yards on the ground on 16 carries. The juxtaposition between these two rushing offenses proved to be the key to the game.

“O-line did a great job all day long, the backs ran hard”, Trubisky said, praising the guys up front and running backs Najee Harris and Jaylen Warren, who both scored on the ground today. “We were efficient on third down, and that helped us come away with the victory…Staying ahead of the chains was huge, and then being efficient on third downs to extend those long drives was critical for us today”.

On that note, the offense was a stellar 12 for 16 on third down against the Panthers, and that did have a lot to do with keeping ahead of the chains and making those situations manageable. They even ran another fullback dive for Derek Watt on 3rd and 1, which he naturally converted, as he does.

The offense picked up 22 first downs during the game in total. 13 of them were on the ground. Harris rushed for 86 yards on 24 attempts, a season high in carries in a game. Warren also recorded 11 rushes, a high for him as well, for 38 yards.

Wide receiver Steven Sims picked up 22 yards on a jet sweep as well, though he also lost three on another. Trubisky didn’t spend much time taking off, having a long run of four yards, something that had become a part of the offense from the quarterback position under Pickett.

But the point is they got their ground game back on track after skidding against the Baltimore Ravens last week. Can they keep it going throughout the rest of the season?