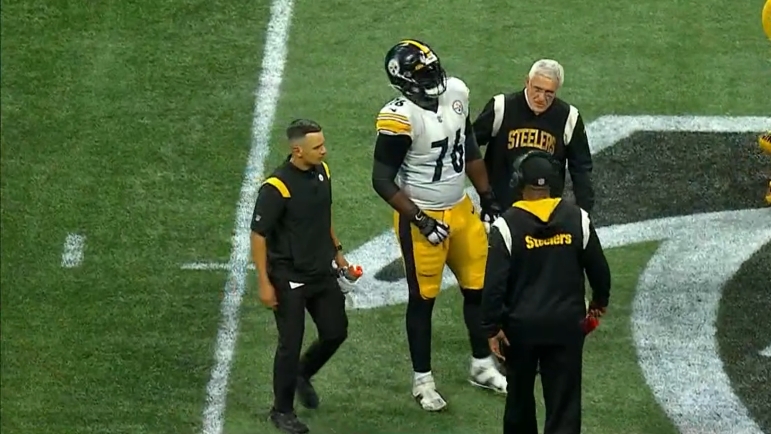 During his weekly Tuesday press conference, Mike Tomlin outlined a few of the notable injuries the Pittsburgh Steelers are facing heading into a crucial Week 14 matchup, their first of the season facing the Baltimore Ravens.

“Chuks went down in-game with a shoulder,” Tomlin said via the team’s YouTube channel. “That may affect him at the early portions of the week. He was able to come back in and finish the game. We’ll see where those roads lead.”

Okorafor seemed to battle the injury early in the game but played through until the second half when he briefly left the game. He was replaced by veteran Trent Scott, logging his first snaps as an offensive tackle this season. Prior to that, he had only been used as a 6th offensive lineman.

While Okorafor returned and finished the game out after missing only a handful of snaps, it sounds like he’s not a lock to play this weekend. If he misses, Scott will presumably be the team’s starting right tackle. Pittsburgh’s offensive line has been remarkably healthy and available this season. All five starters who began the season have played in every single game while only center Mason Cole has missed extended periods of action.

Kicker Chris Boswell and CB William Jackson III are eligible to be designated to return off injured reserve this week but Tomlin didn’t commit to that happening.

Boswell and WJ3 might be eligible to come off IR this week, per Tomlin. Will see what week brings. #Steelers #NFL

Wednesday is the most likely day either player would be designated to return. When that happens, the team will have 21 days to either promote them to the 53-man roster or keep them on IR for the rest of the year. If either were to be removed from IR, that move would likely take place on Saturday by 4 PM/EST.

Tomlin also mentioned a list of guys playing through bumps and bruises, highlighting T.J. Watt (ribs), DL Larry Ogunjobi, while he acknowledged Cam Heyward is likely to get a day off, providing great opportunities for young players like rookie DeMarvin Leal. Leal returned to action on Sunday after missing the middle half of the season with a knee injury.