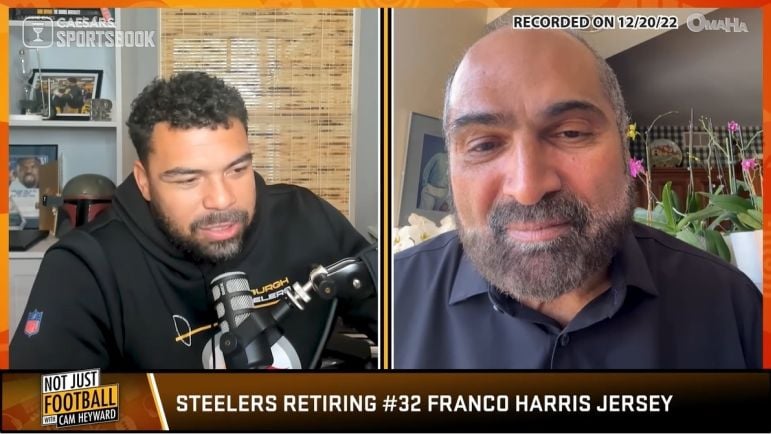 One of the final interviews Franco Harris ever gave was to Cam Heyward, who joined him on Heyward’s Not Just Football Podcast. Recorded on Tuesday December 20th, one day before his death, Harris discussed how excited he was to be part of Saturday’s halftime ceremony, celebrating the 50th anniversary of The Immaculate Reception along with Harris’ #32 being retired, a rare moment in team history.

After initially not airing Wednesday following the sudden and tragic news of Harris’ death, the episode was released Thursday afternoon. Prior to the interview, Heyward said he received the blessing of the Harris family to release the episode. And while listening to it is eerie, Harris’ final public comments are valuable and he spoke about how excited he was for Saturday’s events.

“Art broke the news to me,” Harris said about hearing his number would be retired. “I was just totally taken by surprise. I said, ‘what an honor to have my jersey retired.’ And then all the connections to it. That we’re going to retire it on December 24th. And also a Raider game we’re going to retire it. I mean, it is an incredible honor. The third jersey in 90 years of Steelers’ football. And the first offensive player.”

Despite Harris’ death, the Steelers still reportedly plan to retire his number during halftime of Saturday’s Steelers/Raiders game. It’ll just be done with a somber note instead of a joyous occasion. But in some ways, it will mean more and will be a chance for the city of Pittsburgh to celebrate his incredible life.

Harris becomes just the third player in franchise history to have his number officially retired, joining DTs Ernie Stautner and Joe Greene. While it seems unusual, several teams around the league tend not to officially retire numbers. For example, the Dallas Cowboys have zero numbers in the rafters. Pittsburgh has plenty of unofficial retired digits, 12 for Terry Bradshaw, 58 for Jack Lambert, but Harris’ career and life was worthy of official retirement.

His death is all the sadder knowing his excitement over the ceremony and how close he was to seeing it. Harris was absolutely deserving of the moment and even in knowing it was his jersey that was going to be recognized, he was quick to note the honor was a reflection of the group around him.

“So everything that shines on me shines on the team of the 70s. It was all about team. And wow, did we have a team.”

They had one heck of a team. And they had a heck of a man in Franco Harris who will be deeply missed by all those who knew him.

You can listen to the entire interview below, including Heyward’s introduction following Harris’ death, by following the link as tweeted out by the podcast’s Twitter account.

It was an honor to have Franco Harris on this week's episode of #NotJustFootball to discuss his incredible career & the 50th anniversary of the Immaculate Reception.

Sending prayers to Franco's family, the Steelers & anyone who loved him. RIP Franco.