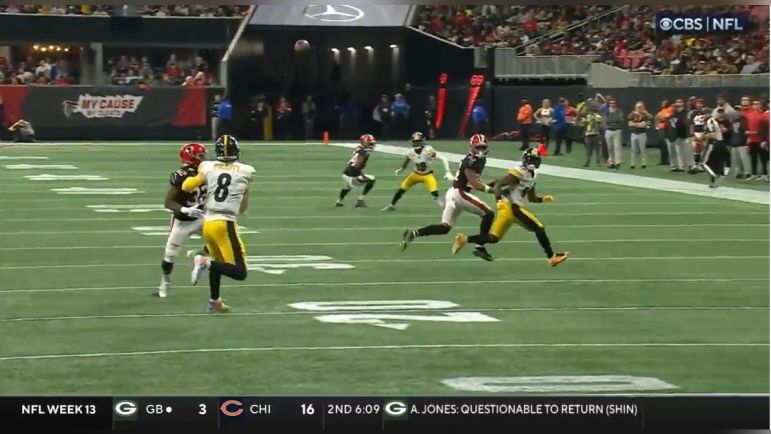 With another start in the books, Pittsburgh Steelers’ rookie first round quarterback Kenny Pickett is improving every week. His development and the performance of the team’s passing game starts and ends with the chemistry he has with his receivers. Chemistry between a quarterback and his receivers is not built overnight, and it was initially challenging for Pickett given he practiced with the second team throughout training camp. The rookie quarterback was asked whether his chemistry with his receivers is improving according to a post-game interview on the team’s YouTube channel.

“I think that’s definitely a sign,” Pickett said when asked if his completion to receiver Diontae Johnson was a sign of the duo’s chemistry evolving. “Each guy has like an indicator. As a quarterback, you just know the indicator right before they break with their body language. And that’s something that I’m learning with each guy and I think I definitely have it with Pat [Freiermuth] and George [Pickens] and now I’m getting there with Diontae because now we’re getting the reps there.”

The completion that Pickett was asked about saw Johnson catch his pass despite having his back turned to the ball. This is the textbook definition of receiver-quarterback chemistry, and it’s something that Steelers Nation saw former quarterback Ben Roethlisberger do countless times with the likes of Antonio Brown, Heath Miller, and Hines Ward.

It only makes sense that Pickett’s chemistry with Johnson is something that took longer to develop than others. The rookie quarterback is more comfortable with receiver George Pickens, as the two have reps together dating back to rookie minicamp. Johnson’s 11 targets led the team by a wide margin, and it’s evident that he and Pickett have mutual trust.

However, Johnson did not lead the team in yards, as tight end Pat Freiermuth’s 76 yards were the most on the team. When Pickett was asked about the second-year tight end, he had nothing but the highest praise.

“Yeah, I think it’s just his IQ really,” said Pickett. “I think he’s a really smart football player, and he knows when to sit a route down or continue to run through his own and get to that second window. Having a chance to play with him now, I have a really good feel for him on those crucial moments, and he’s just a great player. That run after catch was a little surprise to me. It was good to see him opening up a little bit. That was good.”

Freiermuth indeed had himself a game. His 57 yard catch, most of which came after he caught the ball, broke a streak of over 20 games of the team not having a 50+ yard completion. The run after the catch was indeed surprising, as the second-year tight end is not known for his break-away speed. Nevertheless, it was a pleasant surprise to see Freiermuth make a play that few tight ends in the league can.

The best part of Pickett developing chemistry with his receivers is the youth of the group. Pickens is a 21-year old rookie, and Freiermuth is not much older. Johnson is 26 years old, and is under contract for two more seasons. If Pickett develops continues to develop chemistry with this core, he could be playing with them for years to come. If all goes well, Pickett to Freiermuth will be as organic as Roethlisberger to Heath Miller, and Pickett to Pickens will be as organic as Roethlisberger to Hines Ward.