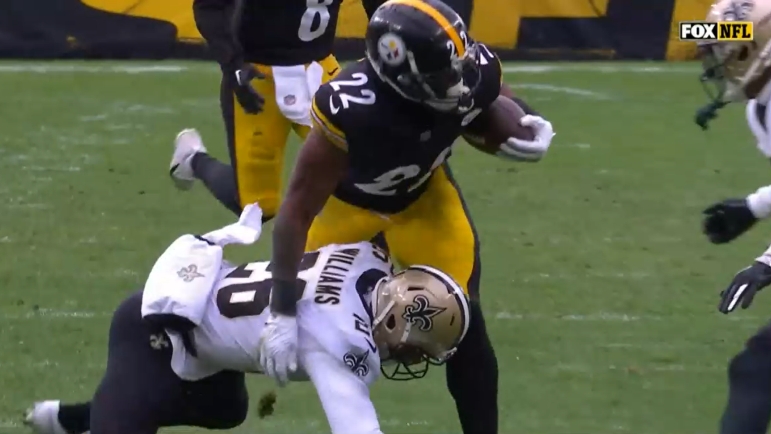 It definitely feels like it’s been a while since we could talk so positively about the Pittsburgh Steelers’ running game. While not quite a finished product, they are grinding out yards and moving the chains and just finding ways to get things done since the bye week, and it’s made a world of difference in their results.

There are a lot of factors to consider, not the league of which being starting running back Najee Harris’ health, as well as the development of a young back like Jaylen Warren, plus a new-look offensive line with a new coach, but nevermind—they’re putting it together now, and according to tight end Connor Heyward, a lot of it is about mentality.

“The guys up front and all the backs—Najee, Benny [Snell Jr.], Jaylen, [Anthony] McFarland—everyone just having that downhill mindset, and if there’s not a hole, they’re gonna make one mindset”, he told big brother Cameron on the Not Just Football podcast when he was asked what was behind the turnaround in the run game.

“You see Najee running with that, leading everybody now and everybody’s following him”, he added, but made sure not to leave out all the work that takes place away from the cameras. “But that starts up in practicing. I feel like we’ve just been practicing well and everybody’s just been more locked into the details”.

I made a comment yesterday in response to somebody that the reality is so much about this offense is better now than it was at the start of the season simply because of the quality of execution getting better. The offense isn’t very different, isn’t much more varied, isn’t much more expansive, than it was back at the start of the year than it is now. The biggest variable has been the way those plays have been run.

And that should be expected. There have been a lot of moving parts this year, including a change at the quarterback position—a change to a rookie, no less. Two new starting offensive linemen and three young starters next to them, all learning from a new coach teaching them something different. Young starters at running back, tight end, wide receiver.

And all new or relatively new in working together and growing together. That takes time, especially when at the center of it is a rookie quarterback who took a lot of third-string reps throughout the offseason.

You need that time together to get in sync. Then when you start having success, you see how it’s supposed to look and you know what to aim for and it makes it easier to repeat the action. Confidence breeds success, and that’s what we’re seeing on the ground. The backfield group following the leader in Najee with the way he’s running now doesn’t hurt, either, mind you.