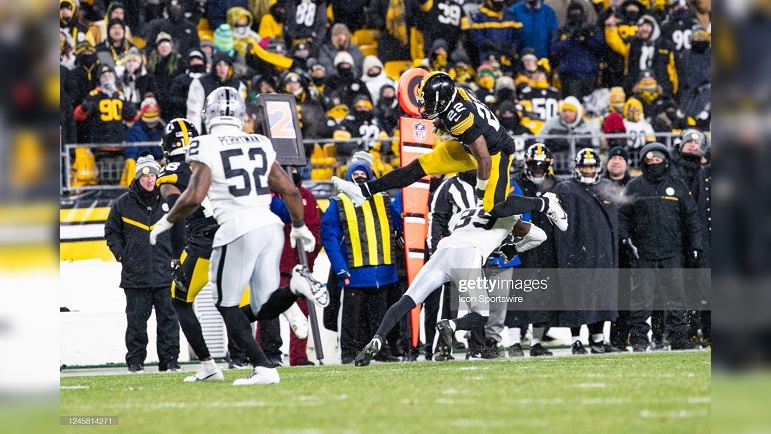 Najee Harris is a rare athlete. The second year running back for the Pittsburgh Steelers has no shortage of highlight plays that showcase this. Since his rookie year, Harris made a habit of hurdling defenders. In the team’s most recent game against the Las Vegas Raiders, he showcased this at the perfect time.

During the Mike Tomlin Show on Friday, the Steelers’ head coach was asked about Harris’ hurdles, and was enthusiastic to discuss it.

“Man, I don’t stop athletes from doing natural things,” Tomlin said. “I think sometimes we can overcoach. I’ve seen him do that on the Alabama tape, I’d imagine he did it on high school tape. It’s a natural act for him, much like Troy [Polamalu] jumping over the line of scrimmage in short yardage circumstances.”

Getting a comparison to Hall Of Fame safety Troy Polamalu is an honor for any Steeler. Indeed, Harris’ hurdles are reminiscent of Polamalu’s jumping over the line of scrimmage to stuff quarterback sneaks.

Troy Polamalu looks back on one of the most memorable plays of his career. His goal line leap over the line against the Titans.

"I kind of, I guess, took a calculated risk there and thank God it ended up working out well." #Steelers https://t.co/G3v4EF8G8u pic.twitter.com/LNXA70HhMi

According to MockDraftable, Harris’ measurables are indeed rare. For his position, his height is in the top 95 percentile, his wingspan is in the top 99 percentile, and his weight is in the top 92 percentile. His hurdle against the Raiders was not his first, and will not be his last. Dating back to his college career at Alabama, the hurdle is his signature move, and it’s certainly one that will make the highlight reels.

Signature plays such as Harris’ hurdles and Polamalu’s leap are rare. While there is an inherent safety risk, it is hard to stop players from utilizing their natural athleticism. As Tomlin went onto say, these plays are just for us to appreciate.

“I think some things are for us to be appreciated,” Tomlin continued. “Sometimes we overcoach or overanalyze and talk about player safety and all that. These guys are outliers, just in terms of who they are. Their athleticism should be appreciated, and this instance is just an example of that.”

Even in a league filled with elite professional athletes, Hurdles are relatively rare in the NFL. Highlight plays that showcase players’ athleticism are a big part of what makes the sport of football great. Hurdling another athlete is not easy to do, and it should indeed be appreciated. It is refreshing to hear Tomlin’s appreciation for said highlight plays, as many others indeed overcoach and overanalyze. After all, it is hard not to cheer or be excited upon seeing your starting running back hurdle another human.