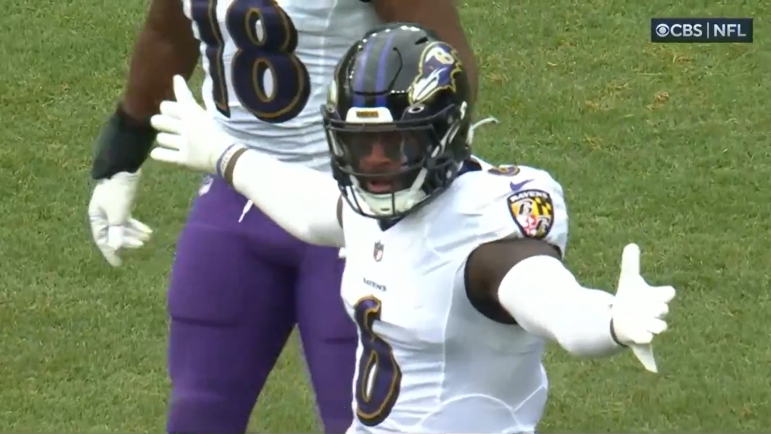 When Tomlin was asked about How the Steelers can go about minimizing the impact of Ravens LBs Roquan Smith and Patrick Queen in this matchup, Tomlin answered that those two defenders will make an impact on the game regardless of what Pittsburgh does to try and scheme around them.

“You don’t,” Tomlin said regarding minimizing Smith and Queen’s impact to the media Tuesday on video from the team’s YouTube channel. “Obviously we got to be sharp, we got to try to get hats on them and things of that nature, but they’re going to be on the field in just about all circumstances. It’s not personnel groupings and things of that nature that take ’em off the field and minimize ’em in that way. They’re just really quality players.”

Last time the Steelers played the Ravens back in Week 14, Roquan Smith and Patrick Queen made their presence felt as the Ravens came out of Pittsburgh with the victory. Queen had six total tackles (four solo), a QB hit, a PBU, and an INT, picking off QB Mitch Trubisky after stating after the game that he knew exactly what was going to happen based on the alignment and the route of TE Pat Freiermuth. Smith had just as big of an impact, recording five total stops (three solo), a TFL, a QB hit, a sack, two PBUs, and an INT of his own. Outside of the stat sheet, Smith also managed to knock QB Kenny Pickett out of the game with a questionable hit.

The Ravens traded for Smith right before the trade deadline, adding the former first round pick and dynamic linebacker to the team to pair with Queen who they had drafted in the first round back in 2020. Both Smith and Queen are dynamic athletes, having the speed and explosiveness to run, hit, and cover with the best of them. Both players cover a lot of ground quickly on the football field, flying to the football as run defenders or use their speed as blitzers or in coverage to make plays on the football.

As Mike Tomlin mentioned, it is nearly impossible to minimize the impact of two athletic, opportunistic defenders like Roquan Smith and Patrick Queen on defense. Sure, Pittsburgh can do a better job at getting bodies on them in the running game and not two INTs right in their direction like Trubisky did last time they faced one another, but they still will find ways to make plays given the caliber of players that they are, and the skill sets they bring.

Still, Pittsburgh can control what they can control and prevent Smith and Queen from making the splash plays that they did in their last meeting. Should they keep Pickett clean in the pocket and Pickett avoid gifting either defender a pick, the lack of splash plays could go a long way in minimizing their impact while helping Pittsburgh leave Baltimore with a victory.