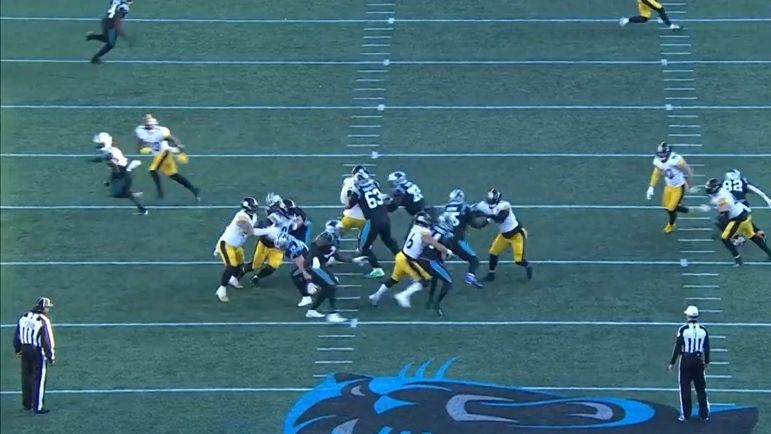 The Pittsburgh Steelers have two of the three only Charlotte 49ers on their roster ever to be drafted into the NFL. A college football program that only began playing in 2015, it produced defensive lineman Larry Ogunjobi in the third round in 2017 as its first-ever NFL draft pick, and Alex Highsmith in the third in 2020 as its most recent.

They both got a chance to be back on a football field in Charlotte yesterday when the Carolina Panthers hosted the Steelers, and it was the alumni who came out on top. Something of a homecoming, it surely meant a little something extra to both of them, particularly Highsmith, who is an NC native, which he talked about after the game, via the team’s website.

And he had himself a pretty good day, as well. Not only did he notch his 11th sack of the season, but he also reclaimed sole possession of first place in the forced fumble category with his fifth on the year, contributing other valuable pressures as well along with a tackle for loss.

While I don’t know if it will work out the way that it should, Highsmith seems to stand a fair chance of making the Pro Bowl this season, especially since his illustrious teammate, T.J. Watt, likely isn’t going to after missing most of the first half of the year due to injury. He’s got the numbers, after all, and his tape backs it up, it’s just about getting recognized properly.

The third-year man was on a slight slide coming into this game, having gone two full contests without recording a sack. That might not sound like a lot but it’s the only time this entire season that’s happened, but he ended that minor dry spell on home soil.

And I’m sure it must’ve felt good. Even though he might have taken down his childhood team, he got to do it in Charlotte, and it’s not as though he didn’t have plenty of fans cheering him on, both those who supported his college career and the Steelers fans in the area or who traveled there. Plus, you know, his own local entourage.

“I’ve got a lot of family and friends in town, so I’m excited to see them,” he said. And, of course, he had his parents in the stands, though father Sam Highsmith is far from a rare sight, either on social media or at Steelers games. A true football dad, I don’t think it even needs to be said how proud he must have felt watching his boy dominating, regardless of the color of his jersey, inside Bank of America Stadium.