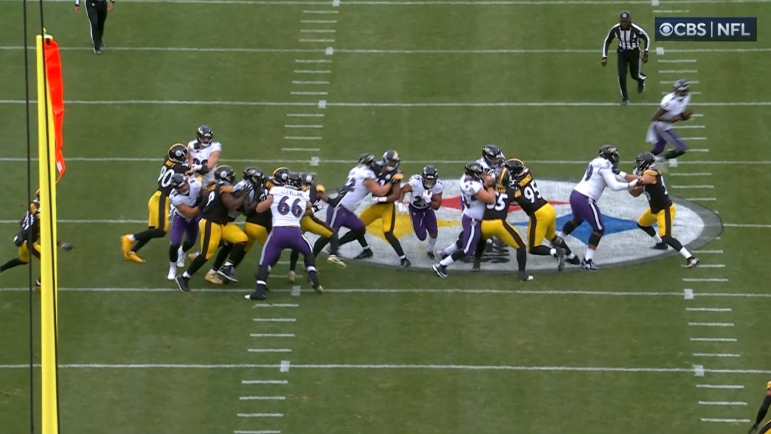 The Pittsburgh Steelers defense has been abysmal against the run over the course of the past six quarters, giving up well over 300 yards in that span, roughly equivalent to what they had allowed in the previous four games.

Granted, they have been going against two of the better rushing offenses in the NFL, particularly today against the Baltimore Ravens just as they got their starting running back, J.K. Dobbins, back from injury. And that proved to be a problem, early and often.

Well, not so often. The third-year back only recorded 15 rushing attempts, but it was more than sufficient, putting up 120 rushing yards as well as a touchdown. The tone-setting run was an early 44-yard gain, for which defensive captain Cameron Heyward took the blame after the game.

“I just tried to do too much”, he told reporters, via Mike DeFabo of The Athletic on Twitter. “I was playing nose and I was out of gap”.

Cam Heyward took ownership for J.K. Dobbins big run: "I just tried to do too much. I was playing nose and I was out of gap."

Heyward was indeed lined up at nose tackle on the play with Larry Ogunjobi to his left and Chris Wormley to his right. Trying to free himself from a double-team by the center and right guard, he attempted to spin off into the B gap but the guard, Ben Cleveland, was able to get him hooked.

With linebacker Myles Jack shooting the same gap and taking on fullback Patrick Ricard, and center Tyler Linderbaum peeling off his double-team block to wall off the other linebacker Devin Bush, there was a wide-open gap right up the middle of the defense for a 44-yard scamper.

It took free safety Minkah Fitzpatrick to chase him down from the far side of the field to drag him down angrily at the four-yard line, but Dobbins was able to easily finish the drive on the next play, putting the Ravens up 7-0 at the time.

That was only two of his 15 carries, of course, accounting for 48 yards. He had another 62 yards on his other 12 carries. Plus, Gus Edwards added another 66 yards and quarterback Tyler Huntley contributed another 31. In all, the Ravens rushed for 220 yards on 39 attempts when you take away kneeldowns.

It wasn’t pretty. That one long run just happened to be the least pretty. And it featured Heyward playing out of position. He talked this offseason about how much he hates playing nose tackle and hoped he wouldn’t have to do it again. Now you know why.