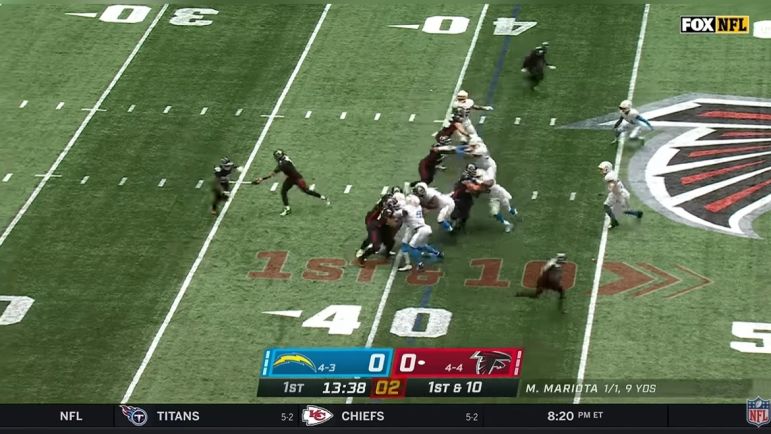 The Pittsburgh Steelers are preparing to face their first true run-first team of the season. Indeed, the Atlanta Falcons run the ball on 51.9% of plays, which is the highest rate in the NFL and makes them one of two teams that run the ball more often than they pass it. Their rushing attack features four players with over 300 yards, including dual-threat quarterback and former second overall pick Marcus Mariota. When asked about the Falcons’ versatile rushing attack, Steelers’ All-Pro defensive end Cameron Heyward went into detail about the challenges it presents for the defense.

“It’s assignment football,” Heyward said during a Thursday press conference on the team’s website. “Guys shedding blocks, getting off tackles, now they have an extra blocker when the quarterback runs it. So it takes front line, and back end. All have to be responsible for their roles and assignments, because if you don’t, the quarterback can hit his head on the goalpost.”

The Falcons’ rushing attack is indeed versatile. The team hired Arthur Smith as their head coach, who was Mariota’s offensive coordinator with the Titans in 2019, and was reunited with him this past offseason. In doing so, they fully embraced the run-first identity, which was indeed similar to the one that Mariota ran in Tennessee.

Atlanta’s backfield features a four-headed monster. The team’s leading rusher is rookie running back Tyler Allgeier, and former receiver Cordarrelle Patterson is right behind him. With a backfield that features a variety of backs with a variety of running styles, they are indeed hard to prepare against.

The Steelers are no stranger to run-first teams. With the Baltimore Ravens and quarterback Lamar Jackson in their division, they are all but used to playing against that type of offense. As such, Heyward was asked about similarities between the Falcons’ and Ravens’ run games.

“Yeah, it’s not a shot at anybody,” Heyward said when asked. “It’s a little bit different, but because every option is available, it’s very similar in that approach. But Cordarrelle Patterson out of the backfield, not many people can replicate what he can do. I kind of relate it back to when Mariota was with the Titans before, having Derrick Henry and DeMarco Murray. He’s got some really good backs, and it really presents a challenge for us.”

There are indeed similarities between the two teams’ approaches to the run-game. Every option is indeed available on every play, which is essentially the offense that the Ravens have ran for years. The one difference is that Baltimore is very reliant on Jackson in their run game, as his 755 yards lead the team in rush yards by a significant margin. Meanwhile, Mariota ranks third in rush yards on the Falcons.

Interestingly, the Steelers have fared well defensively against run-first quarterbacks, especially Mariota and Jackson. The team has prioritized the front seven as the vocal point of their defense, which especially pays off against mobile quarterbacks. Indeed, Jackson averages 43.4 rush yards per game on 4.6 yards per carry against Pittsburgh, which is well below his career average of 64.2 yards per game and 6.1 yards per carry. In his one game against Pittsburgh, Mariota only ran for five yards on five attempts.

The Steelers run defense ranks significantly better than last season. The team allows the sixth least rush yards in the NFL, and is tied for sixth in allowing 4 yards per carry. This makes for a good match up on paper, and the Steelers should be able to neutralize what the Falcons do best.