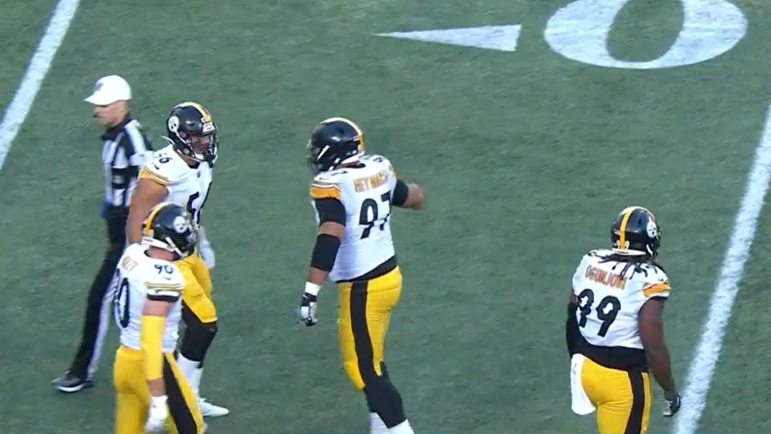 In the previous six quarters entering Sunday’s Week 15 matchup against the Carolina Panthers on the road, the run defense for the Pittsburgh Steelers was rather leaky, allowing 333 yards to the Atlanta Falcons and the Baltimore Ravens.

The 215-yard performance by the Ravens in Week 14 all but ended the Steelers’ hopes at the playoffs, but on Sunday the Steelers cleaned up the run defense issues in a massive why by keeping it rather simple, according to defensive captain and star defensive lineman Cameron Heyward.

Outside of throwing some new fronts and faces at the Panthers Sunday, the Steelers did what good defenses do. They got off blocks and rallied to the football, holding the Panthers to just 21 rushing yards on 16 attempts in the 24-16 win, taking the Panthers completely out of their style of play, forcing quarterback Sam Darnold to try and beat them.

Spoiler alert: he couldn’t, so the Steelers improve to 6-8.

Speaking with reporters after the win, Heyward said it was rather simple as to what the key to success was this week after six rough quarters.

“We got off blocks, rallied to the ball in the run game,” Heyward stated to reporters, according to video via Steelers.com. “They were behind the chains a lot of times. They converted a couple times, but I thought for the most part we did a great job of meeting the style up front.”

By limiting the Panthers to just 21 rushing yards on 16 carries Sunday, it was the lowest rushing output allowed by the Steelers since Week 10 of the 2015 season when the Steelers held the Cleveland Browns to just 15 rushing yards that season, according to Steelers Communications Manager Michael Bertsch.

Pittsburgh has not held an opponent to 21 yards rushing or less since Week 10 of 2015 when the Steelers held Cleveland to just 15 yards rushing.

The 21 yards rushing allowed by Pittsburgh is the ninth-fewest in a game since the 1970 AFL-NFL merger. https://t.co/izii30DsZD

The 21 rushing yards by the Panthers was also the fewest Carolina has had in a single game since Week 1 of the 2012 season in which Carolina rushed for just 10 yards.

After being criticized all week in the media and challenged by the coaching staff throughout the week, the Steelers’ defensive front responded in a massive way, turning in the best performance of the season by a mile against the run.

Heyward, Larry Ogunjobi, T.J. Watt, Alex Highsmith, and Montravius Adams lived in the Panthers’ backfield, while guys like Devin Bush, Robert Spillane, DeMarvin Leal and Mark Robinson made plays around the line of scrimmage against the run, getting off blocks and making the plays that were there.

Getting off blocks was the key in the end. It sounds simple, but it can be rather difficult at times. The Steelers responded in a massive way Sunday though, getting off blocks and dominating at the line of scrimmage.