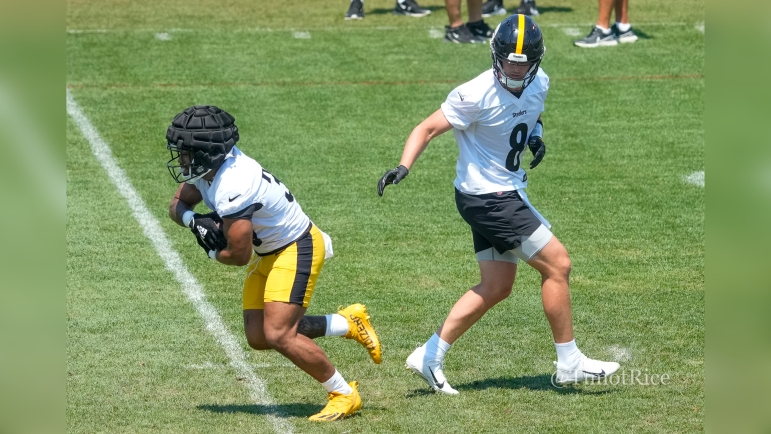 The Pittsburgh Steelers have won back to back games and are looking to make it three straight Sunday in rookie quarterback Kenny Pickett’s first game against the Baltimore Ravens. Pickett has had an up and down rookie year, but has been given ringing endorsements from all around the Steelers organization.

Last night, another Steeler praised Pickett, this time it was undrafted rookie Jaylen Warren. Warren joined The Arthur Moats Experience With Deke podcast and was asked about what he thinks of his teammate and fellow rookie.

Pickett has been called a good leader by almost everyone, and here again another teammate is praising his leadership. It is hard for a rookie to come into a locker room and have the guts to call out other players, especially veterans, but according to Warren, Pickett has had no qualms in doing so.

After Pittsburgh’s blowout loss to the Philadelphia Eagles, Pickett said that the team needs to study more, causing an absolute frenzy over the bye week in the Pittsburgh media. The team must have heeded his advice as since the bye week the Steelers are 3-1 and have cut down the mistakes.

Pickett plays the most important position in football and his ability to lead in the locker room and on the field and tell players when they messed up is so important. It shows that he has the confidence that he knows what he is doing is correct and shows that he knows the playbook well.

The upwards trend Pickett is on bodes really well for his future, but now he has to face off against the Ravens. It will be Pickett’s first ever home game in Pittsburgh in the month of December against the team’s biggest rivals. It will be a tough task, and likely a low scoring game, but his confidence and leadership has the whole team rallying around him and give the Steelers as good of a shot as ever to keep their season alive.