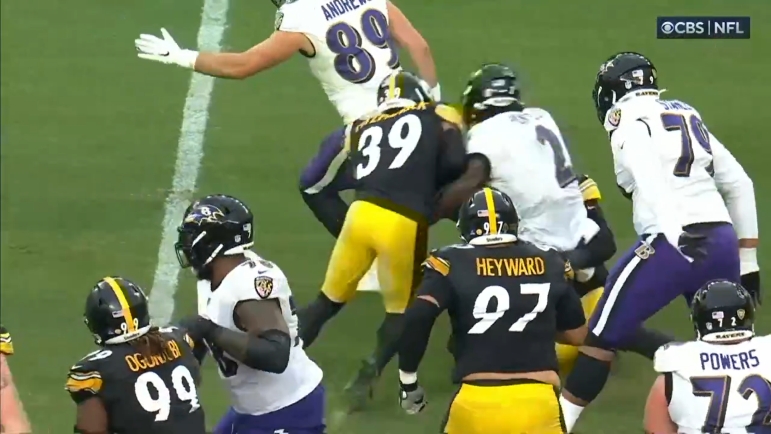 Although they’re making a strong second-half push and could realistically go at least 6-3 in their final nine games, if not 7-2, the Pittsburgh Steelers are staring down the possibility of having their worst season since 2003.

Lose one more game and they’re looking at a losing record, something that hasn’t happened in the Steel City since they drafted quarterback Ben Roethlisberger. It wouldn’t be a shock if the first one comes the year after he retired.

But it hasn’t been all bad, by any means. In fact, there’s been a lot of good football played this year. The running game has turned things around. Outside linebacker Alex Highsmith has had a breakout season. And safety Minkah Fitzpatrick has been Minkah Fitzpatrick. It still astounds me that he got snubbed from the Pro Bowl last year.

He unquestionably will be officially named to the Pro Bowl later tonight when the Pro Bowl rosters are revealed, and he’ll probably be back on the All-Pro list a short time later as well. He’s having yet another great season. Even the greats of the past have to appreciate what he’s doing and has done.

That includes Hall of Famer Mel Blount, who was on 93.7 The Fan last night during an interview with Aditi Kinkhabwala. Asked if Fitzpatrick could have played on the Steelers teams of the 70s, he said, “I do, I think so. I think he’s a generational player. He’s a huge asset to the Steelers’ secondary. You could tell when he’s not in there.”

Oddly enough, and certainly not to doubt or contradict Blount, Pittsburgh actually somehow managed to win the two games that Fitzpatrick missed this season. The first seemed like a miracle, taking down the Tampa Bay Buccaneers, though as the season wears on, beating Tampa no longer seems all that impressive.

Still, even though they won, Blount is absolutely right when he says that you can tell when Fitzpatrick’s not on the field—especially if you really know what to look for. The Steelers simply do things with him that they don’t, and can’t, do with others. They allow him to do things that others would probably not be allowed to do.

For as much of a ballhawk as he might be—he has four interceptions on the season and 15 (and counting) in 58 games with the Steelers, plus 36 passes defensed—he also does not lack for toughness or physicality.

Not only is he an excellent tackler, but he’s also more than capable of throwing his weight around and delivering huge hits. He’s not an in-the-box type of guy you want around the front seven the majority of the game, but he’ll play forward. He had to do that last year and got the job done with 124 tackles.

The defense has allowed him to get back into more familiar territory this season and his performance reflects that. And I firmly believe Blount is right in saying Fitzpatrick could have played on that team. But he wouldn’t have needed to. They already had a Hall of Fame free safety in the great Donnie Shell, only lately properly appreciated.