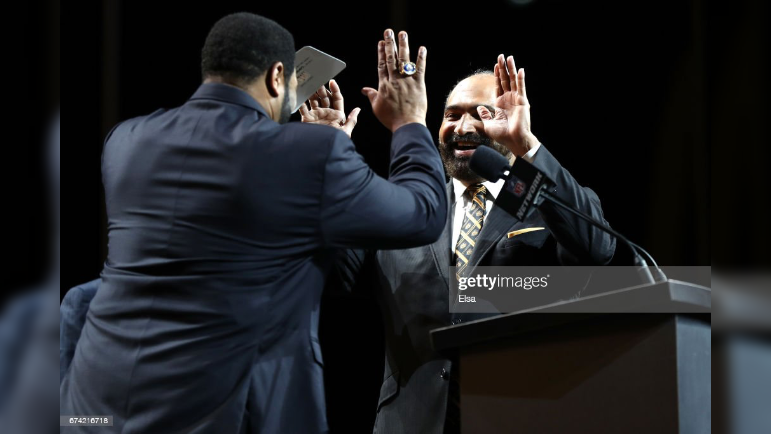 Throughout the illustrious history of the Pittsburgh Steelers, which includes six Super Bowl championships, there have been many, many great players that have come and gone that have worn the black and gold.

Twenty-three Hall of Fame players, to be exact.

None were arguably more important to the Steelers than Franco Harris, which makes the sudden, shocking news of his death Wednesday at 72 all the more difficult to comprehend, especially with the 50th Anniversary of the Immaculate Reception on Friday and his jersey retirement ceremony Saturday at Acrisure Stadium against the Las Vegas Raiders.

For former Steelers running back and fellow Pro Football Hall of Famer Jerome Bettis, Harris was the architect of the Steelers tradition that is well-known today. Appearing on ESPN’s First Take Wednesday morning, Bettis reflected on what Harris meant not only to the Steelers organization, but the city of Pittsburgh and Steeler Nation as a whole.

“Steeler Nation, it’s in mourning because Franco was really the architect, if you will, of that, that Steeler tradition,” Bettis said on ESPN, according to video via ESPN’s YouTube page. “I know obviously, Joe Greene was really the first building block, but Franco came and really changed the culture and everything. And then after his career, he was able to show all of the future Steeler players how to be a professional, how to handle the celebrity with grace with class.

“I was a fan of Franco in terms of everything he did after he played. I modeled myself after him because of what he meant to the city, but what he did for the city as well,” Bettis added. “So he was special, he was an icon in the city of Pittsburgh. He was so giving of his time, of his monies, of his energies, and I wanted to really emulate that because he was the one guy, if you talk about the Pittsburgh Steelers, he was the guy that you looked at and you said, ‘he’s a special guy’ even off the field.”

As has been well documented over the years, once Harris came into the Steelers organization as a first round pick in the 1972 NFL Draft out of Penn State, things changed entirely for the Steelers franchise, which had just five winning seasons before that from 1933 on.

Harris’ play on the Immaculate Reception against the then-Oakland Raiders on Dec. 23, 1972 gave the Steelers their first playoff win in franchise history and really helped set off the dynasty in the 1970s, winning four Super Bowls. He as so impactful then, still holding the NFL record for most rushing yards in Super Bowl history with 354 yards to this day.

Legendary Steelers RB Franco Harris, author of the “Immaculate Reception” – one of the greatest plays in NFL history – has passed away at the age of 72.

A 4-time Super Bowl champion, Hall of Fame player and revered individual by so many.

Off the field though, he was equally as impactful in his post-playing days in the Pittsburgh community, donating time, money and energy to multiple projects, organizations and charities to help make Pittsburgh a better place.

While he may have been the architect of the Steelers dynasty on the field as the final missing piece, he was an architect for the Pittsburgh we know today off the field as well.