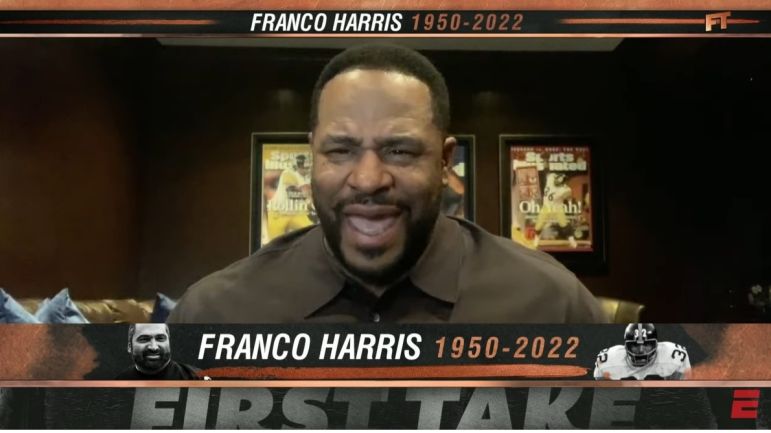 “I remember Franco as just a wonderful individual,” Bettis told the show. “He knew how to welcome you in. He was such a huge figure but he knew how to just ingratiate himself with you to make you feel comfortable. Because you knew you were talking to a legend. But everyday he was so kind, generous.”

For all his on-field accolades, Harris was just as revered off the field. And Bettis’ story about Harris is a common one. Franco did the same with Najee Harris, the Steelers’ 2021 1st round pick, and the two struck up a relationship with Harris recently noting how often Franco spoke with him.

Many players who had the career Franco did, four Super Bowls, a gold jacket, the greatest play in NFL history, wouldn’t have the humility he carried. But he showed that to all the players and all the people meant. Bettis went on to share his memory of meeting Harris for the first time.

“My first year in Pittsburgh, he decided to have lunch with me. And I’m saying to myself, ‘who am I? I’m this young running back.’ And he befriended me and I was just in awe of him. And I actually told him that I was not a Steeler fan growing up as a kid and I actually hated him. And he laughed it off and he said, ‘Well, now you gotta love me.’ And that’s when our relationship really took off. He was a special man and I’ll never forget him.”

Bettis grew up in Michigan and played his college ball at Notre Dame meaning he didn’t grow up in Steelers’ territory. After playing for the Los Angeles Rams, having early success before falling out of favor, Pittsburgh traded for him in 1996. Bettis went on to have an incredible career in Pittsburgh and after years of getting close, finally won a Super Bowl in 2005 in his hometown of Detroit. An old-school franchise built by the running game, the Steelers have been fortunate to have great runners and great people in their backfield. Bettis, Harris, Rocky Bleier, and now Najee Harris. Those who represented the team and city on and off the field. Perhaps no one did it more gracefully than Franco.

Bettis’ story of Harris is heart-warming to hear but it’s a common one this Wednesday. Harris was loved by those who knew him and they all tell a familiar story of kindness and friendship. As Steelers’ Nation mourns his passing, it’s a story that figures to be told again and again by so many others.

Check out the entire interview with Bettis below.