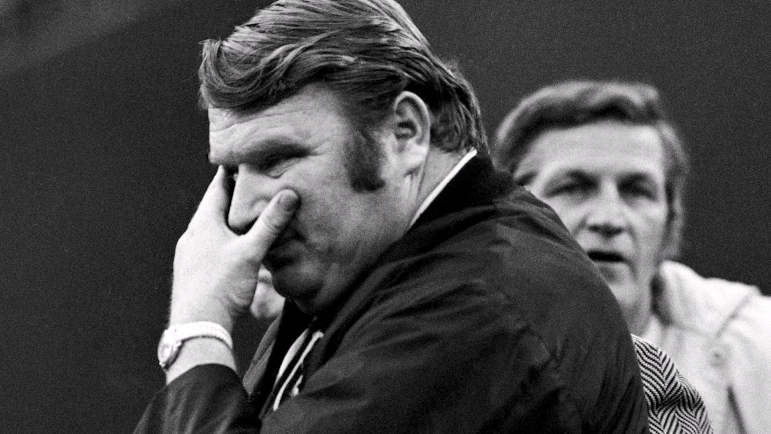 The 50th anniversary of the Immaculate Reception is just two days away. The Pittsburgh Steelers will be playing the (now Las Vegas) Raiders a day later. And the football community is still no closer to a definitive answer as to what happened on that play than on-field official Ron Swearington was when he made the ruling after making a phone call in the dugout.

That’s what ate at former Raider head coach John Madden. If you can’t say for sure what happened, and there was no ruling on the field, then how did they end up with that decision and not the other way around? Who did Swearington speak to? That was his interpretation. An end zone view of the play does show that a back judge wearing 63, not Swearington, did signal a touchdown as the play reached the end zone.

“It’s a hell of a thing a goddamn game has to go down to someone up in the press box,” Madden said from the locker room after the game, according to a new video program the Raiders created in honor of the 50th anniversary of the play. And his son, Mike, spoke on John’s history with it as well.

Of course, the famous story is that Swearington was essentially told that if he wants to get out of that stadium in one piece, he was going to have to rule it a touchdown. The game took place at Three Rivers Stadium, not because they had a better record than Oakland (though they did), but because at the time, the league rotated which division winners would host the divisional round on a yearly basis. Had it been a year earlier or later, it would have been in Oakland.

And Three Rivers Stadium had never seen a playoff game before. They’d hardly even seen good football up to that point, at least from the home team. The fans stormed the field after Franco Harris crossed the goal line. It was a situation in which a genuinely unsafe environment could have developed, lending to the plausibility of that story.

Not insignificant words since Madden sadly passed away nearly a year ago on December 28, 2021. It’s a bit sad to think that this gnawed at him until his dying day, and as his son suggests, it continues to haunt him even beyond the grave.

Why, though? Why did that game bother him so particularly when they won the Super Bowl in 1976? After all, that was the year of the Miami Dolphins’ undefeated season. And they lost in the conference round three years in a row after 1972.

“When you’re the coach of the Oakland Raiders and you’ve got these great players, you’ve got a minimal opportunity to win a world championship,” his son said. “He won one, so he only had nine other [opportunities]. And to have one of those opportunities to get a ring that declares you a world champion ended on this play, in this confusion, and never get an explanation, he never let it go.”

When discussing the actual mechanics of the Immaculate Reception, of course, there are two variables at play, not one. The most debated, wrongfully, is whether or not Harris actually caught the ball without it touching the ground. The evidence that he did is clear as day.

Less certain is whether or not Steelers running back Frenchy Fuqua was the last player to touch the ball. Although an antiquated rule, it was in place at the time that two offensive players could not touch a thrown pass consecutively. If the ball bounced directly off of Fuqua and into Harris’ hands, it would be an illegal play.

NFL history records that the ball had to have bounced last off of Raiders defensive back Jack Tatum, who collided with Fuqua on the play at the catch point, which caused the ball to ricochet back to Harris. That’s all we really need to know, because that’s the official record, but the fact that we don’t really know definitively will continue to be a part of the mystique of the moment.