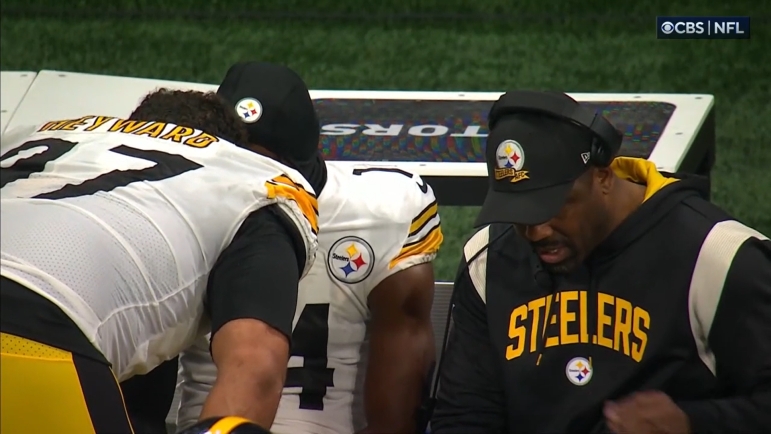 Mike Tomlin believes too much is being made out of George Pickens’ frustration throughout Sunday’s game against the Atlanta Falcons. Though there’s plenty of truth to that, players getting mad in-game is as common as blocking and tackling, at one point, Cam Heyward thought enough of the situation to speak with an upset Pickens on the bench.

During the latest episode of his Not Just Football podcast, Heyward detailed his conversation with Pickens and why he decided to talk to him.

“I honestly didn’t know what all was going on, but I could just tell in his body language that he needed to pick me up. As a captain, as a leader, I’m always gonna have my guys back. I just said, ‘George, this game’s gonna gonna keep coming your way. One game, one play, one series is not the end of George. When it’s not looking your way, you look for other ways to be better.’

Pickens was hardly involved in the Steelers’ offense, finishing the day with one catch for two yards on two targets. Well into the second half without a catch, cameras caught a dejected-looking Pickens on the bench next to WRs Coach Frisman Jackson followed by Heyward walking over to him.

Playing in a run-heavy offense that held a lead throughout the game, the Steelers didn’t have to open up the pass game. Pickens was largely used as a clearout player, running vertical routes to open things up underneath and the few chances he had on shorter routes were interrupted by pressure or Kenny Pickett going elsewhere with the football.

To Heyward’s point, Pickens still found smaller ways to impact things, like throwing a key block on Najee Harris’ 14 yard run, his longest of the day.

The most important takeaway and lesson from the game is winning cures all. But Heyward, like Tomlin, appreciates Pickens’ fire and passion.

“We got the W that’s the main point. But man, we like George’s hunger. George is gonna be a heck of a player in this league for a very long time. When he’s able to mold that into his game and continue to keep growing, he’s gonna be a hell of a player.”

It’s why Heyward is a captain and leader of the team. He doesn’t just talk to his positional group, his side of the football, but his entire team. Pickens may not have received the message well in-game when emotions are high but they’re words he’ll remember throughout his career.

Despite the quiet game, and those will occasionally pop up the rest of the season, Pickens is in the midst of a strong rookie campaign. He’s playing in a statistically bad passing offense but is third on the team in receptions (37), yards (512), while his two touchdowns tie for the team lead. He’ll look to bounce back against the Baltimore Ravens in a pivotal AFC North matchup this Sunday.

Check out the full episode, featuring Connor Heyward, below.