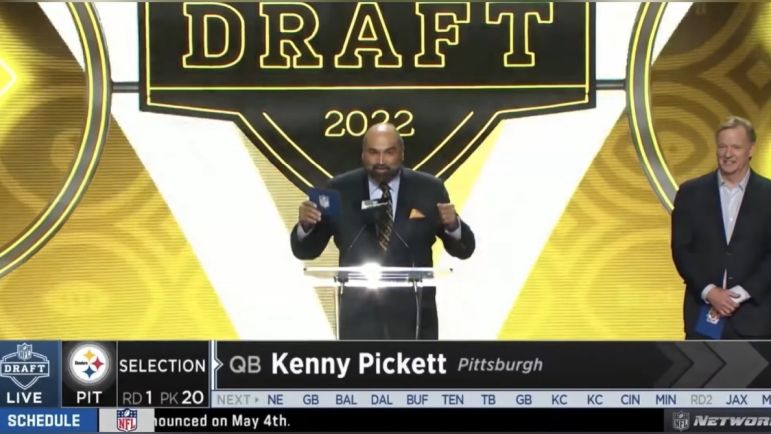 After the tragic and sudden death of Pittsburgh Steelers legend Franco Harris, many players on the team have shared their interactions with Harris and how he has impacted their lives. Today, it was rookie quarterback Kenny Pickett’s turn to tell the world how Harris impacted him.

In his media availability broadcasted on Steelers.com, Pickett was asked if he had any interactions with Harris.

“Yeah, there was one time I think he came to a practice,” Pickett said. “I was able to talk to him after and obviously, he announced my name at draft night. And one of the best moments of my life outside of family and getting engaged was on that draft night [it] was really special. And seeing the emotion, watching it back yesterday, the emotion he had when I was drafted and how he introed the call, you know, it’s obviously so special, but I think the way he did it made it even that much more special.”

Pickett, only being a rookie, has not had the time in the organization to be around Harris as much as someone like Cam Heyward or T.J. Watt, but still even in less than a year as a Steeler he has met Harris. It just shows how much love Harris had towards the Steelers organization that he would consistently come back to practices year after year to meet the new players and try to show them the Steeler Way.

Today, Pickett mentioned how happy Harris was announcing his pick on draft night, as upon seeing who was on the Steelers draft card said into the microphone on stage in Las Vegas, “I love this, I love this.” A special night for Pickett was made even better due to the fact that a Hall-of-Famer was so excited that Pickett was joining his team.

Here’s a look back at the moment Harris announced Pickett’s name as the 20th pick of the 2022 NFL Draft and Pittsburgh’s first round selection.

A common theme in Pittsburgh is how the legends always come back and visit practices and see the new players. It is what makes the Steelers organization so special in that it really has a college-like feel with alumni always popping in and making sure things are the way they are supposed to be.

While some people believe the Tomlinism “The Standard is The Standard” is cliché and means nothing, it certainly means a lot to the players in the locker room and former Steeler greats. I am sure despite not having a lot of interaction with Harris, Pickett knows the standard Harris set in the Steel City and that Harris relayed that standard to him at that practice earlier this season.