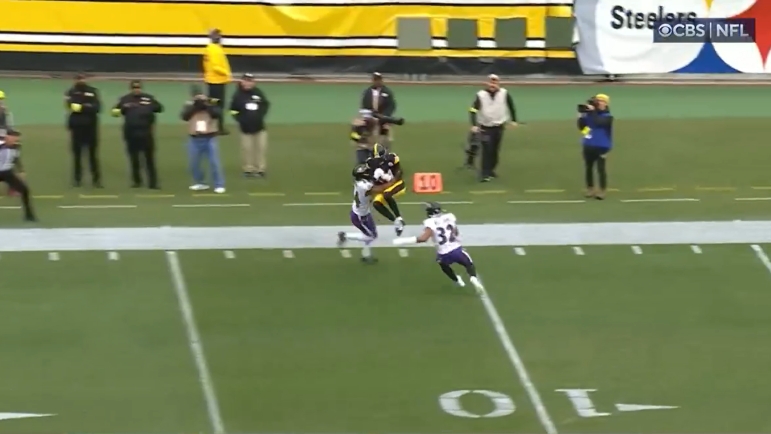 Closing in on the conclusion of his rookie season in the NFL, Pittsburgh Steelers wide receiver George Pickens already finds himself in elite company as an explosive, downfield weapon in the passing game at the NFL level.

Coming out of the University of Georgia, Pickens was viewed as a downfield threat due to his size and overall speed, not to mention his elite body control and vice grip-like hands. So far, that’s exactly who he has been in the NFL.

While the overall usage hasn’t quite been there for Pickens in a relatively limited offense in the Steel City under second-year offensive coordinator Matt Canada and up-and-down quarterback play from the likes of fellow rookie Kenny Pickett and veteran Mitch Trubisky, Pickens continues to produce at a high level whenever given the opportunity.

On the year, Pickens has recorded 47 catches (74 targets) for 700 yards and three touchdowns, averaging an impressive 14.9 yards per catch, good for 10th overall in the NFL.

Of those 47 catches, 13 of them have gone for 20+ yards, which counts as an explosive play. Those numbers put him in elite company in the NFL in 2022, behind only Miami’s Tyreek Hill and Minnesota’s Justin Jefferson, two All-Pros and arguably two of the best at the position overall, according to Pro Football Focus.

Only Tyreek Hill and Justin Jefferson have more 👀 pic.twitter.com/qRtuVSzqiA

Keep in mind, those are targets 20+ yards downfield, not 20+ yard catches, which includes short passes taken 20+ yards after the catch. Combining those two types of receptions, Pickens has 15 20+ yard receptions on the season, which puts him seventh in the NFL, right behind names like Buffalo’s Stefon Diggs, Tampa Bay’s Mike Evans and Philadelphia’s Devonta Smith with 16. Jefferson leads the league with 27 overall, while Hill has 25.

Being in that type of company for Pickens as a downfield weapon is rather impressive as a rookie in an offense where he’s very clearly the No. 2 option — sometimes No. 3 — in the passing game.

Of those 13 receptions 20+ yards downfield, Pickens’ longest came in Week 14 against the Ravens in the first quarter off of a bomb from Trubisky, who had just entered the game for an injured Pickett.

Though the target share isn’t quite there yet for Pickens, the tape that he’s put out this season as a rookie has been rather impressive at times, especially in contested catch situations. While he doesn’t create a ton of separation on routes and isn’t much of a playmaker after the catch at this point in his career, when the ball is thrown to him downfield, chances are great he’s going to come down with the football.

The future remains very, very bright for the second-round pick in the Steel City.