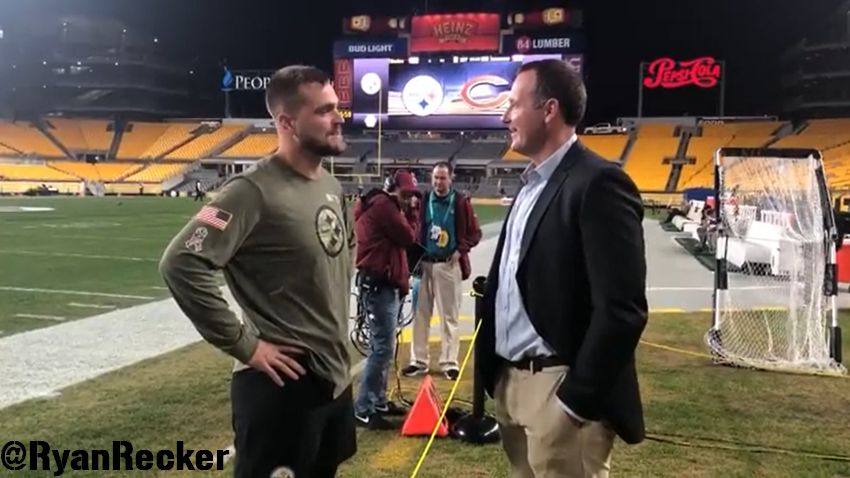 Pittsburgh Steelers fans like any other fanbase have their favorite players past and present. Former tight end Heath Miller was and absolutely still is one of them. But second-year Pat Freiermuth has been stepping into those shoes in more ways than one. They chanted HEEEATH whenever Miller made a catch. Now, in a clear homage to Miller, it’s become MUUUTH.

While it’s become a fixture at Acrisure Stadium, the chants were rather audible on Sunday…in Atlanta. Particularly during the tight end’s 57-yard catch-and-run in the first half, the longest play of his career. Steelers fans let their team know that they were in the house, that’s for sure.

“I knew there were a bunch of Steelers fans there, so I could expect it, but it’s definitely cool going into an away venue and hearing it”, he told reporters yesterday via the team’s site. He added that he started laughing when he heard it the first time in the Falcons’ stadium—and that fellow tight end Zach Gentry gave him a playful little side-eye for it.

It’s not as though Miller is a distant memory, though. Freiermuth has gotten a few opportunities to meet his predecessor already, and they’ve even built a bit of a relationship. He made sure to stop by earlier this year when Miller was in the team facilities for the announcement of his induction into their Hall of Honor. And Miller, as you would imagine, is totally on board with the MUUUTH in every sense.

“The origin of it pays respect to Heath”, Freiermuth also mentioned to the Associated Press’ Will Graves. “He said it’s cool to see it transition into ‘Muth’”.

It’s only fitting, really. Freiermuth was compared to Miller during the pre-draft process. After the Steelers selected him in the second round in 2021, former offensive coordinator Bruce Arians contacted good friend and former Steelers quarterback Ben Roethlisberger to let him know that he’s going to love his new tight end, calling him “the closest thing to Heath Miller I’ve ever seen”.

Everything said has proven to be true. Even after Roethlisberger retired after the 2021 season, he recently expressed that one of his biggest regrets is that he didn’t have more of an opportunity in his career to play with Freiermuth.

The tight end had two primary goals heading into his second season this year, areas that he wanted to improve: in-line blocking and yards after the catch. The former is a work in progress, but the latter has come to fruition.

Equally important in his usage though is that the Steelers have been giving him more opportunities down the field and he’s proven that it’s an effective strategy. His average depth of target last year was just 5.3 yards beyond the line of scrimmage. This year it’s 8.8.

Not necessarily the bedrock of Miller’s game, but rarely did the first defender ever tackle him. Freiermuth isn’t a carbon copy, but he absolutely deserves the distinction of being the Steelers’ next great tight end, at least until proven otherwise. If HEEATH himself approves, who am I to deny?