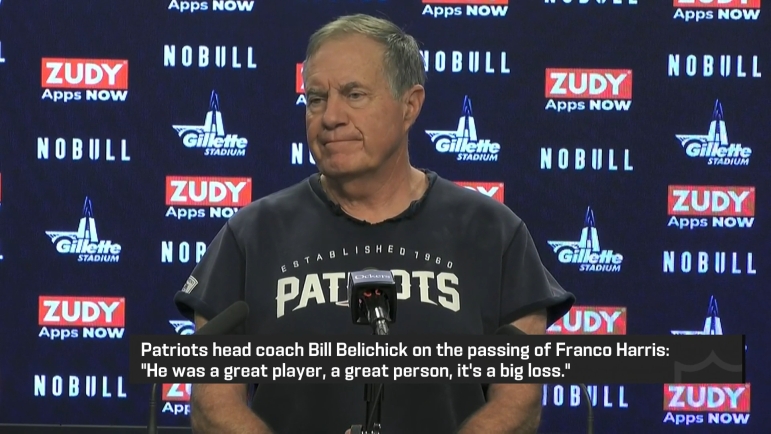 Love him or hate him, there haven’t been many in the history of the game quite like Bill Belichick. Both an incredible football mind and an incredible football historian, he can give you some of the most fascinating answers to questions as long as you engage him in his areas of interest, like obscure aspects of the game or of its history. He knows things professional football historians don’t.

But it’s not just a matter of history for Belichick when it comes to Franco Harris. It’s a part of his own story. He coached against Harris a few times, beginning in 1975 as a member of the Baltimore Colts’ coaching staff as a special assistant, and then twice in 1978 with the Denver Broncos.

“He wasn’t fun to play against, I can tell you that”, he told reporters yesterday as news of Harris’ passing reached every corner of the NFL community. “I was at Baltimore. We played him in the playoffs there my first year. The guy was a great player, a great person. It’s a great loss”.

The Steelers handily defeated the Colts in the divisional round in 1975 by a score of 28-10, although that was a game that saw them pull away in the fourth quarter, including a 93-yard fumble return by Andy Russell to seal it.

Franco got the scoring started with an eight-yard touchdown run in the first quarter, one of 17 postseason touchdowns in his career, which still ranks as the fourth-most in NFL history behind Jerry Rice (22), Emmitt Smith (21), and Thurman Thomas (21).

It also happened to be one of Harris’ all-time great games, rushing for 153 yards on 22 carries, which helped to define his legacy in particular as a postseason workhorse (although he did fumble twice as well).

Another fascinating piece of the story is that on the other side of the ball was Lydell Mitchell, running back for the Colts, who was Harris’ teammate and the starting running back for the Penn State Nittany Lions. Some thought back in 1972 that the Steelers would actually draft Mitchell in the first round (he would be drafted in the second), but they drafted Harris instead.

Mitchell went on to have an All-Pro career in his own right, although he never got that Super Bowl title. Both were also New Jersey natives before making their way west to Penn St. Their paths diverged in the NFL draft, but collided on that day, December 27, in 1975.

Mitchell, Belichick, and the Colts would find their way home from Three Rivers Stadium, but the Steelers stayed put, taking down the Oakland Raiders in Pittsburgh a week later before finally dethroning the Dallas Cowboys in the Orange Bowl to claim their second Super Bowl title in a row.