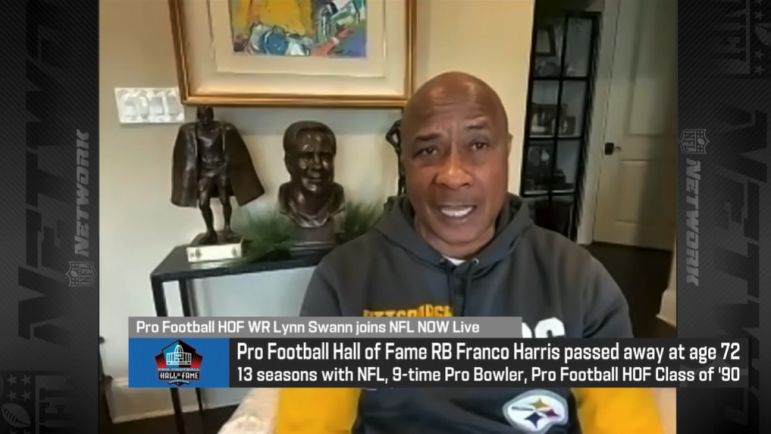 As the world process the death of Pittsburgh Steelers great Franco Harris, some of his teammates have joined different television programs to talk about the kind of man Harris was and what it was like to be a teammate of his.

Today, Harris’ teammate and fellow Hall of Famer Lynn Swann joined NFL Network to talk about him and detail what Harris meant to the Steelers organization and the city of Pittsburgh.

“I think he means so much more than the words,” Swann said. “Franco wasn’t a guy about the words, Franco was a guy about the action. At practice every day, the time he put in to get better, to be ready for a football game. The time he gave off the field; sitting behind me is my Man of the Year trophy. Franco was Man of the Year, and if you followed in his footsteps you’re gonna achieve the same thing. So you dedicate yourself, you put in the hard work, and that’s who Franco was.”

Harris was a great player on the field, and Swann clearly attributed that to the hard work he put in. While Swann could say many glowing things about Harris, his actions speak louder. The work he put in to get better behind the scenes was what lead to him becoming a nine time Pro Bowler, four time Super Bowl champion, and a Hall-of-Famer.

What stood out most though, was that Harris’ actions as a community member really influenced Swann. Harris won the Man of the Year award (now known as the Walter Payton Man of the Year Award) in 1976 for his actions in the Pittsburgh community. This clearly impacted Swann, who only five years later in 1981 won the Man of the Year honor, joining Harris and Joe Greene (1979) as members of the Steelers 1970s dynasty to win the award.

While Harris was a great player on the field, he was equally if not a better man off the field. While everyone will remember what he did on the field, Swann and others in the Pennsylvania community will also remember how he helped off the field as well.