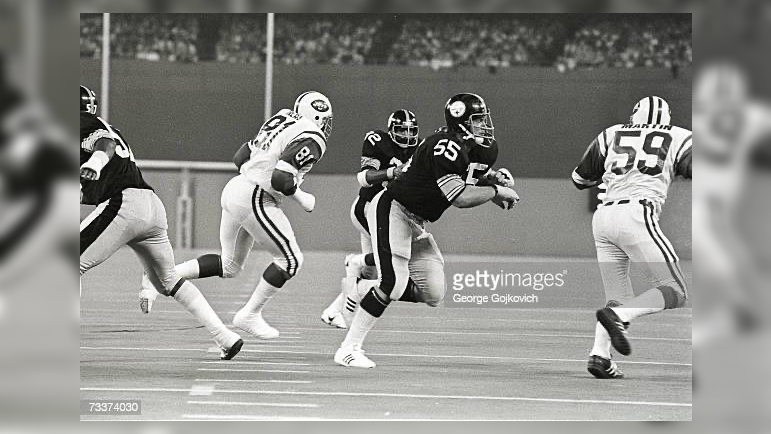 Pittsburgh is a city forged on toughness, grit and lunch-pail attitudes, and it’s a direct reflection of their beloved Steelers football team. Over the decades, many monstrous players stand out on the squad, and not many younger fans may know the name Jon Kolb today, but those of a certain era know damn well who he was.

Often regarded as the strongest NFL player of his era, the 6-foot-2, 262-pound Kolb played along the offensive line in Pittsburgh for his entire career from 1969 to 1981, and was named a First-Team All-Pro in 1979. Obviously he had the great privilege of opening up holes for his good friend, former running back Franco Harris, who suddenly and tragically passed away in the wee hours of the morning yesterday at the age of 72.
This weekend was to be a celebration of the grandest kind, as it was the 50th anniversary of what’s widely and universally known as the top play in NFL history, the “Immaculate Reception.” Not only that, the number 32 jersey that Harris wore was to be cast aside and retired by the team, never to be worn again. And on a storied team such as the Steelers, he was only to be the third number ever to be retired. Obviously this puts a tremendous damper on the mood as we approach this Saturday’s game, but Kolb spoke at length earlier today as to reasons why it will still indeed be a celebration.
The first time he saw Harris in practice during Harris’ rookie year in 1972, he said he knew he was all business. If it was a play from the 50-yard line, Harris wouldn’t just execute the play for 10 or 15 yards then return to the huddle, no he’d run charging the whole way to the end zone every single time.
“He came in setting the pace, so to answer your question, I think we set the pace and we go hard,” Kolb said earlier today on Mad Dog Sports Radio on Sirius XM. We’re Pittsburgh Steelers, that’s what we do, we go hard. I think we celebrate his life and this is Pittsburgh. Pittsburgh is a different city.”
Just hearing those comments, it’s clear the mentality Kolb embraced as a Pittsburgh Steeler, and he still embodies that to this day. No slouch as a player himself, he’s a member of the team’s All-Time Team and recently in 2021 was enshrined in the team’s prestigious Ring Of Honor. For the younger fans who are enamored by social media posts of the players, if you think the Instagram weightlifting posts by James Harrison are impressive, Kolb had him beat as he competed in the World’s Strongest Man competitions in 1978 and 1979, placing fourth in both years, despite competing against much larger and heavier competitors, and reportedly squatted well north of 700 pounds.
Kolb obviously had a front row seat to this Saturday’s spectacle play back on December 23, 1972, but as he was blocking on the play, he didn’t know if it was a good or bad thing, based on the crowd’s reaction.
“There’s two crowd noises, one, when your quarterback gets sacked, which you don’t want to hear, and the other one when you have a touchdown. The next thing I see is people are pouring out of the stands like crazy, there were a thousand people pouring out of the stands and those officials, they had to go touchdown because they didn’t wanna face a thousand Pittsburgh fans.”
Thousands more will be on-hand Saturday night, braving the frigid cold to spend Christmas Eve remembering an iconic play in both Steelers’ and NFL lore, but also to pay respects to a black and gold star that will shine on forever.