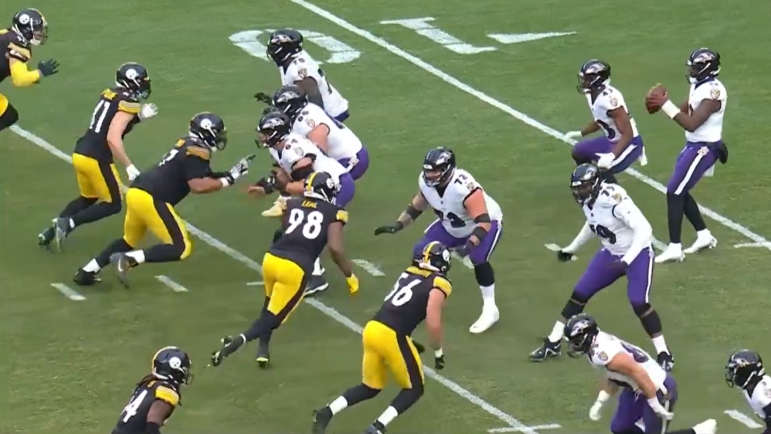 It’s a little late in the game for these sorts of things, but the Pittsburgh Steelers have their backs firmly against the wall at this point following yesterday’s loss to the Baltimore Ravens and they know it’s time to test their mettle.

They now sit at 5-8 with four games left to play and they need to win every one of them—or win three and tie the other—in order to avoid a losing season, and it’s hard to see much of a path toward the postseason this year with a losing record.

“It’s upsetting,” veteran outside linebacker Alex Highsmith said about the loss to the Ravens, via Joe Rutter of the Pittsburgh Tribune-Review, “but it will be a test of our character and integrity as a team.”

The Steelers under Tomlin have never been a team to throw in the towel regardless of the circumstances. Even when they started the 2013 season 0-4, they kept at it and finished the year 8-8. The season finale that year was the only game Tomlin has ever coached in which there were no hopes of making the postseason, and he won that game.

Not even in 2019 when they lost quarterback Ben Roethlisberger for the season in week two, already 0-2 on the season, did they give up. No, learning that safety Sean Davis would be out for an extended period of time and already coveting him greatly, they made a huge trade to acquire Minkah Fitzpatrick.

And they damn near made a postseason run. They made it all the way to 8-5 with a combination of Mason Rudolph and a rookie college free agent named Devlin Hodges before the bottom fell out and they ended the year on a three-game skid.

This year, too, has been a significant one. They were 2-6 going into the bye week, but that hasn’t stopped them from pushing, even while fans have been rooting for them to tank. They were 3-1 coming out of the bye before yesterday’s game, during which their starting quarterback, Kenny Pickett, was knocked out of the game early.

Not that it was just the offense at issue, but even special teams contributed to the woes with a field goal being blocked. But the defense in particular had a very specific criticism for itself, as Highsmith saw it after the game.

“We weren’t physical enough,” he told Rutter after the defense allowed 220 rushing yards on the ground on 39 rushing attempts (excluding kneel-downs). “The reason we’ve been a successful run defense all year is because we’ve been playing physical. We didn’t do that enough.”

Of course, they’ve allowed over 330 yards on the ground in the past six quarters. And the Carolina Panthers are running the ball very well right now, so they can’t afford to have a lull in this area of the game going into next week. But it appears as though they may have no choice. At the very least, there is a test they must face, and they very well might not pass.