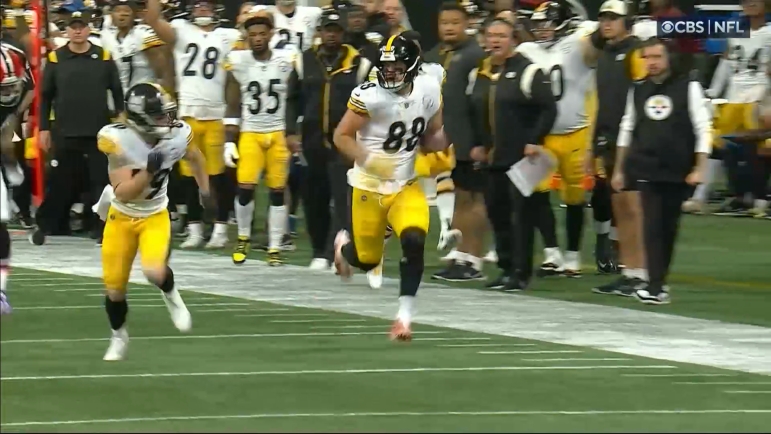 The Pittsburgh Steelers narrowly edged out the Atlanta Falcons on Sunday, winning 19-16 on the road in Atlanta to improve to 5-7 on the year. The running game once again showed up in a big way as Pittsburgh rushed for 154 yards as a team while RB Najee Harris managed to come back and post 86 yards on 17 carries after exiting last week’s game against the Colts with an abdomen injury.

The passing game was uninspiring for the box score once again this week as QB Kenny Pickett totaled only 197 yards in the contest, failing to go over 200 yards for the sixth time this season. However, Pittsburgh did manage to improve in one key area of the passing game that has plagued them throughout the season: yards after the catch.

Pickett completed 16 of his 28 pass attempts on Sunday against the Falcons, of which 105 of the 197 passing yards in the game were gained after the catch. This doesn’t speak glowingly about Pickett’s average target depth, but it does speak volumes concerning Pittsburgh’s passing game and its ability to pick up YAC after struggling mightily in this category this season in OC Matt Canada’s offense.

105 YAC on 16 catches for the Steelers against Falcons. 48 of that came on the Freiermuth catch and run #Steelers #NFL

As Dave Bryan highlighted in his Tweet above, a majority of Pittsburgh’s YAC against the Falcons came on this reception by TE Pat Freiermuth that went for 57 yards deep inside Atlanta territory. As you can see, Freiermuth spins out of one tackle attempt by #24 AJ Terrell and breaks another along the sideline and as the great Chris “Boomer” Berman often says, Freiermuth goes rumbling, bumbling, stumbling down the field before getting chased down near the Falcons’ ten-yard line, picking up 48 yards after the catch.

Seeing as Freiermuth nearly accounted for half of Pittsburgh’s YAC on one reception Sunday, the remaining plays didn’t have the same impact in terms of yardage after the catch, but were still encouraging to see from the offense. For example, here are two receptions make by #18 Diontae Johnson where Johnson breaks to the inside of the field, the first clip being a shallow drag and the second being more of a slant concept. We have been complaining about Pittsburgh’s lack of using the middle of the field to start the season, but we have seen the team more winning to call concepts that allow receivers across the middle of the field to get run-after-catch opportunities.

Another example of Pittsburgh getting more YAC on Sunday comes on this reception by RB #24 Benny Snell Jr. who leaks out of the backfield and works across the middle of the field as Pickett works to his right to evade the pressure and gets the ball to him for an 11-yard gain. Snell only manages to get a few yards after the catch on this play and probably had the chance to pick up more YAC had Pickett put the ball on him a little sooner. However, Snell does manage to pick up the first and ends up getting horse collar tackled at the end of the run, tacking on an additional 14 yards for the offense which sets up Pittsburgh inside the red zone.

In the NFL, it’s important not only to have a passing game that can stretch defenses vertically down the field, but also challenge defenses east/west by getting playmakers in space to create with the ball in their hands. We have seen the likes of Tyreek Hill, Deebo Samuel, A.J. Brown, and so many other receivers greatly benefit from being schemed up to get the ball in space and create after the catch. Pittsburgh’s WRs have been objectively terrible in this metric this season, and while the receiving core wasn’t exactly stellar on Sunday in terms of YAC, player like Freiermuth and Snell stepped up and provided the offense more of a spark in the passing game.

It’s hard for a QB to consistently nail tight window throws and complete passes down the field, making YAC such an important component to help a QB out in terms of getting easy completions and yardage. We have seen the Miami Dolphins implement this strategy this season by surrounding Tua Tagovailoa with a track team of speed at the skill positions to give him weapons where he just must complete the pass and watch them create magic afterward.

While the Steelers may not have the weaponry the Dolphins do at wideout, it would be wise for the team to continue to find ways to scheme up more YAC to take some pressure off Pickett allowing him to distribute the ball effectively and watch his playmakers create with the ball in their hands.