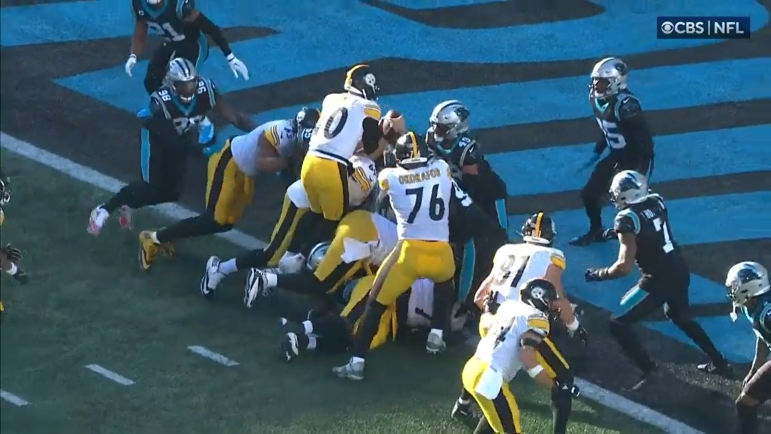 Sunday, the Pittsburgh Steelers were cooking up something pretty special. A 21-play drive to start the second half, using up 91 yards and 11:43 – nearly the entire third quarter – that ended in a Mitch Trubisky QB sneak touchdown.

So how do you make it? What are the ingredients to do something, 21 plays in one possession, that has been done only seven times league-wide since 2001? It takes a lot. It isn’t easy to make. If I wanted to go all Guy Fieri on you, this is what you need. Clear off the kitchen counter. There’s work to be done.

You need one cup of an angry special teams coach. To go 21 plays means you’re driving the length of the field which means starting a drive near your own goal line. On the opening kick of the second half, the Steelers were called for two penalties, one by RB Benny Snell and one by S Miles Killebrew, the latter accepted for an unnecessary roughness call. Instead of Steven Sims’ return starting the Steelers on the 30, they began at their own nine.

Every 21-play drive starts with the first snap and getting out of your own end zone is as good a place to start as any. Despite running the ball 45 times Sunday, tying a Mike Tomlin-era record, the Steelers came out throwing on 1st and 10. Top of the screen, Diontae Johnson creates space at the top of the route, and Mitch Trubisky hits him for a seven-yard gain. It’s the base of the 21-play cake. Nothing fancy, you don’t see it as part of the finished product, but it’s the foundation.

A fresh set of downs

Every 21 play-drive begins with a first 1st down. Facing 3rd and a long 1, RB Najee Harris barrels ahead for exactly one yard. But it’s enough to move the sticks. A downhill run of this split flow action behind Miles Boykin, a better choice than Gunner Olszewski who the team had been using, and it converts.

Call it a teaspoon on the whole drive but this play is like cinnamon – a little goes a long way.

Because a failed third and long isn’t how you put together 21 plays. Still, at their 19 and facing 3rd and 9, Trubisky hit Johnson out of the slot on this deep out route. Johnson sold vertical to open up the space underneath to the sideline. Wouldn’t call this meat and potatoes, those were Harris’ consistent runs, but third and long pickups are a tasty side dish to complete the meal.

An explosive play (but not too explosive)

Because no one goes 21 plays with a 60-yard touchdown. This play can’t be too sweet but it was the best of the Steelers’ drive. After showing QB sneaks on third and short, the Steelers mixed things up by running the jet run to Steven Sims who caught the edge and ran down the right side for 22 yards.

Instead of trying to make a play, #49 for the Panthers is flapping his arms like he’s advertising used Hondas in a Pittsburgh suburb and Sims puts the Steelers in plus territory. It was the longest gain of the team’s 45 rushing attempts.

When you’re in the kitchen, something’s bound to catch fire (at least when I cook). Diontae Johnson tried to flambé this drive with his taunting penalty after a nifty third down conversion. What should’ve been 1st and goal from the seven turned into 1st and 10 from the 22 after Johnson was called for taunting this Panthers’ DB.

Johnson claimed he didn’t see him but if that’s the case, I have some touchdowns to sell him. Ya know, things that don’t exist.

Remember when Chris Berman would run through the highlights on Sunday NFL Primetime and the lovable Detroit Lions would do something actually good, and Berman would hit ya with the “The…Lions???”

But all Pittsburgh needed here is one and Watt hammered ahead to prevent Pittsburgh from settling for a field goal. And marching towards that 21-play mark.

The Refs To Be…The Refs

The Steelers should’ve had just 20 plays. That’s what we should be talking about. Somehow, Mitch Trubisky wasn’t declared over the goal line on his first quarterback sneak. Even though, just watch it. He’s in. There’s no way he’s not. But the refs ruled him short setting up the 21st snap.

Congrats! You’ve made the meal. Now go celebrate. Mitch Trubisky did so with this awkward-but-effective hop over the goal line, trying to find the line between stretching the ball over the goal line versus not getting it swatted out of his hands. It had the grace of a baby deer first walking but, finally, after 21 plays and three iPhones (probably) being unveiled, the Steelers got into the end zone.

For all that work, if you go 21 plays, you better do a touchdown dance. Pittsburgh did.

Nothing Pittsburgh did yesterday was flashy. It was more like a rugby scrum than a football team. A slow slog into the end zone, step by step, yard by yard. They ran the ball a metric ton, they stayed on schedule, they hit a couple of third-and-longs and they finished their drives, a perfect 3-3 in the red zone.

It’s a slow-cooked meal. Good barbecue, not stuff you can pop in and out of the microwave. Sunday, the dish was well worth the wait.