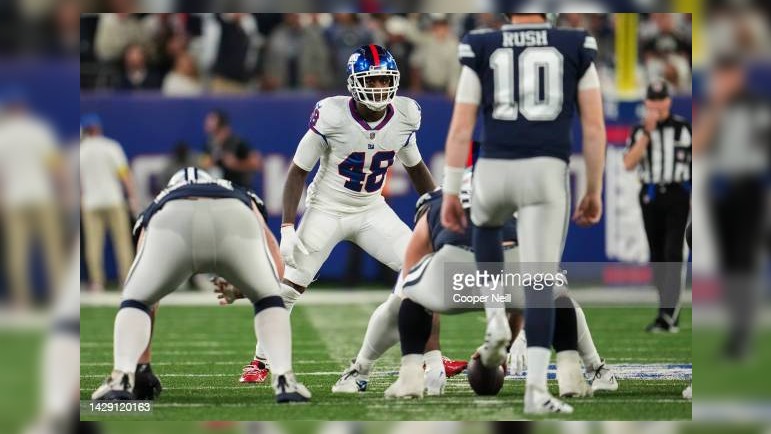 The Pittsburgh Steelers made a move at inside linebacker on Tuesday, signing ILB Tae Crowder off the New York Giants practice squad after they placed Marcus Allen on IR after undergoing biceps surgery that will effectively end his season. The addition of Crowder is significant for Pittsburgh as the former Mr. Irrelevant back in 2020 has done far more than many would have expected being the last pick in the 2020 NFL Draft, playing in 41 games with 31 starts, piling up 232 total tackles, eight career pass deflections, and two career sacks. He started 17 games in 2021 and played 94% of the Giants’ defensive snaps, finishing with a career-high 130 total tackles to go along with two interceptions.

Crowder played in 13 games with eight starts for the Giants this season but was benched after the team’s Week 9 bye. He would then lose playing time to other members of the Giants LB core including LB/S Landon Collins who the team brought back on the practice squad, eventually cutting Crowder to make Collins a solidified piece on their 53-man roster. New York signed Crowder back to their practice squad after going unclaimed on waivers, but the Steelers signed him off their practice squad just yesterday.

So, what exactly are the Pittsburgh Steelers getting in LB Tae Crowder? They are getting a young, athletic, run-and-chase linebacker that also brings special teams value to the table upon the loss of Allen to the roster. When watching Crowder’s tape with the Giants, you see an aggressive defender that plays with great pursuit sideline-to-sideline of the football. He does a good job reading with his eyes in the backfield and is quick to pull the trigger and hunt down runners who attempt to get to the corner.

Crowder understands leverage as an off-ball LB and will keep his shoulder square to the LOS as run defender, getting into good position to work around blocks and rally to the football for the tackle.

Crowder accelerates to the football well with good closing burst both as a run defender as well as a QB spy/blitzer. On this clip against the Titans, you see Crowder do a good job of working around the block by LT #77 Taylor Lewan and proceeds to blow up #22 Derrick Henry as he gets to the second level, decleating the giant running back with a nasty highlight hit.

As mentioned above, Crowder is an effective blitzer, whether it be coming from the box or off the edge. While he doesn’t have a nuanced pass rush skill set when it comes to hand usage, Crowder closes on the QB quickly in pursuit, being able to put pressure on the passer to force an arid pass or hunt down the QB for the sack himself with two QB takedowns in three seasons.

Tae Crowder has shown improvement in his coverage skills since coming into the league. He has developed a better understanding for spacing and picking up receivers in zone coverage, using his eyes to read the QB as he goes through his progression in the pocket. While not the most fluid athlete when moving backwards or laterally, Crowder can adequately cover the middle or the flats in zone and has had his instincts take him to the right spot at the right time on a couple occasions when it comes to tipped passes or INTs.

Still, while Tae Crowder has shown improvements in coverage, it still should be considered a weakness to his overall game. He tends to guess at times where the receiver is breaking out of his route and can be a tad slow to process what is happening in-front of his as the receiver comes out of his break, allowing separation to be had and the pass to be complete as Crowder attempts to recover and limit yardage gained after the catch.

This same delayed processing in coverage also will affect Crowder in run defense as well as he often needs to see what is happening with his eyes rather than trust his reads and naturally flow to the football. On this play against Chicago, we see Crowder do a good job fending off the block by #71 Jason Peters, but he is a tad slow to cut back inside as #32 David Montgomery cuts back inside, getting lost in the trash when he could get in on the tackle. This play isn’t so much of a processing error by Crowder more than a general lateral movement skill he needs to work on.

Another big problem in Crowder’s game is his consistency as a tackler. Pro Football Reference currently has Crowder with nine missed tackles in 2022 (16.7%) after missing eight last season. The number of tackles isn’t the issue as much as the lack of technique as Crowder often dives at the ballcarrier on contact rather than running through the ballcarrier. His wrap up needs to be stronger to avoid having runners break through arm tackles at a near 17% clip like this season.

Overall, LB Tae Crowder is a good addition to the Steelers LB core as a guy that has ample starting experience the last three seasons that also injects more youth into the defense, being only 25-years old. He possesses good size (6’3, 235lb) and athleticism you look for in an off-ball ILB that can play the run with good effort in pursuit as well as work around blocks. He is effective at spying the QB and coming on the blitz when sent, displaying closing speed to the ball.

However, while his coverage instincts are improving, he still can be a liability at times, especially when in man coverage. His tackling also can be a flag for concern as he needs to do a better job getting ballcarriers to the ground.

Crowder likely can be penciled in at ILB4 on the roster ahead of rookie Mark Robinson, but behind starters Myles Jack and Devin bush as well as Robert Spillane who knows the system and has earned the respect of the coaching staff to see more playing time. Given that there are only two games guaranteed left in the season, it’s hard to see Crowder getting more than a handful of snaps on defense while picking up some snaps on special teams as well.

If anything, the signing of Crowder can be viewed as a move for the future with 2023 in-mind rather than the final two games of 2022. Signing Crowder to the roster now gives Pittsburgh the opportunity to bring him back on a relatively inexpensive deal should they like what that see the next few weeks, giving them a young player with starting experience given that both Bush and Spillane are upcoming free agents this offseason.