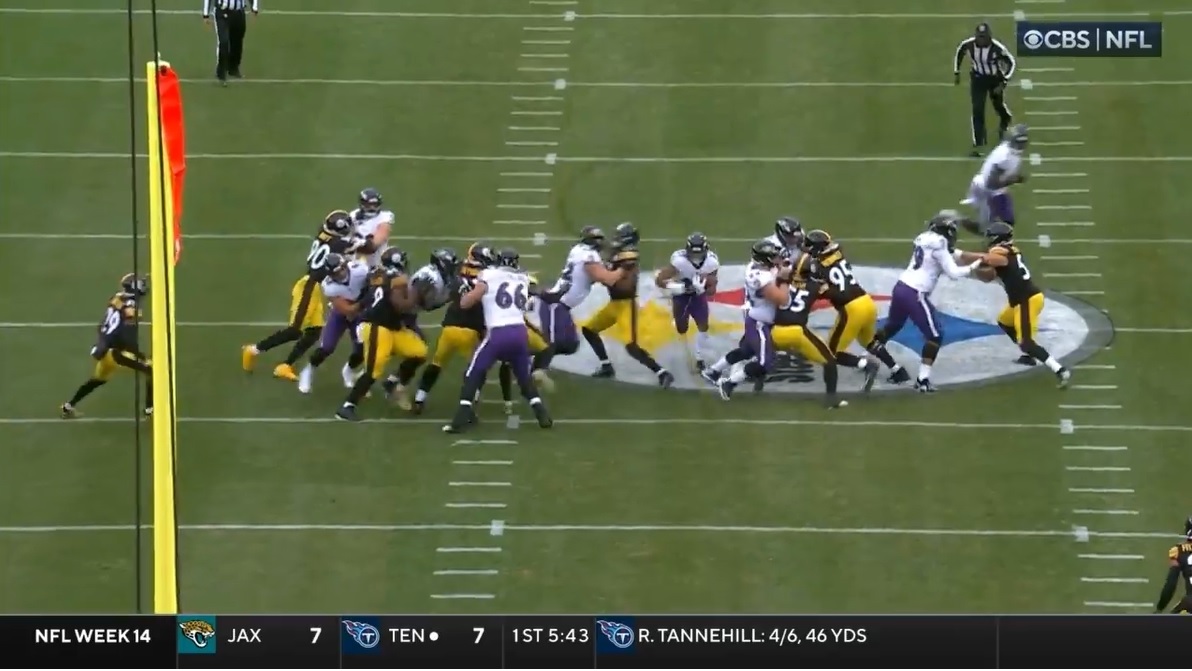 I want to do a deep dive and breakdown on the Pittsburgh Steelers’ horrible run defense in Sunday’s loss to the Baltimore Ravens, allowing 215 yards in a 16-14 defeat yesterday. Baltimore running all over Pittsburgh is nothing new but it’s always worth examining. We need to wait for the full All-22 to come out to best break down their issues but we have an end zone view of the biggest run of the day, J.K. Dobbins’ 44-yard bust up the middle.

It was emblematic of the run game woes. So let’s break that play down and build it out from there. How did Dobbins get so free right through the heart of the Steelers’ defense?

The first thing you should know, and you won’t see it from the end zone clip made available during the broadcast, is the Steelers had a late shift. An over front d-line alignment to a more standard 3-4 look. Pittsburgh attempted to “stem” the front with late movement in an attempt to get the Ravens to move and false start, something that’s been effective in recent home games.

What that does here is put Cam Heyward as a straight-up nose tackle, a spot Heyward hasn’t played much and about the one area he doesn’t excel in. He was sporadically used there last season and it didn’t go well along with everything else run defense-related.

Based on what I can see, here seem to be the Steelers’ run fits. 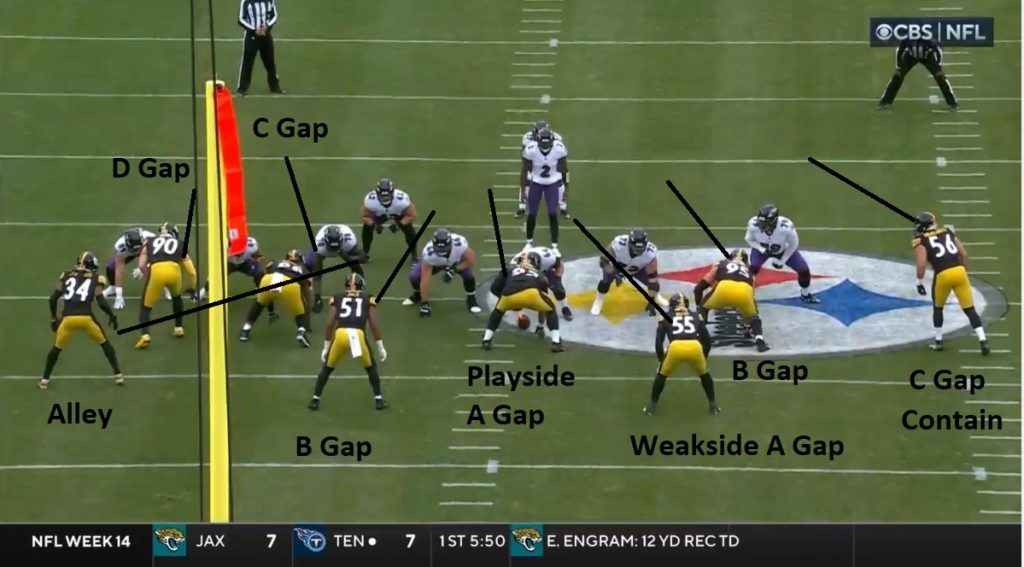 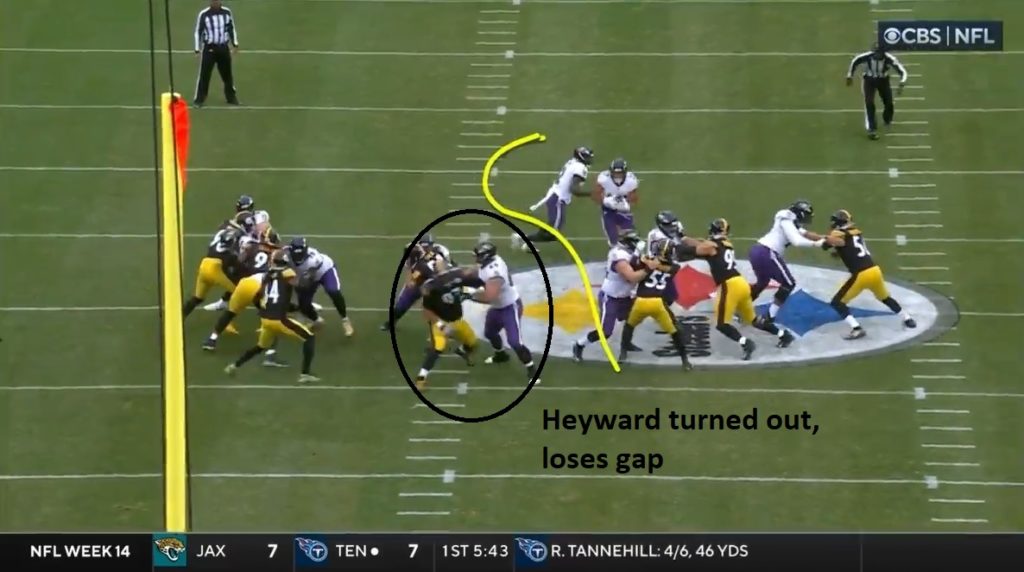 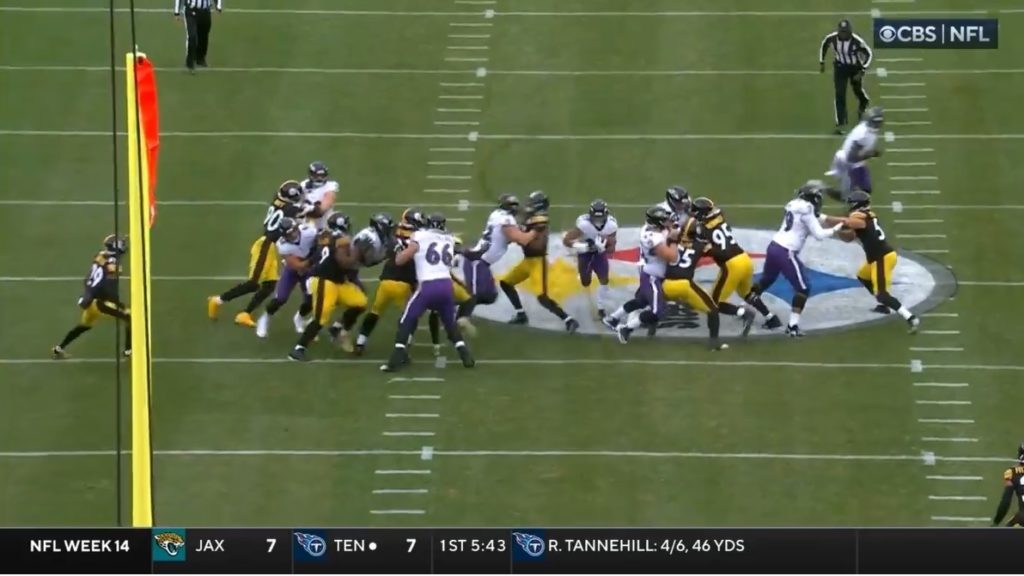 Heyward gets turned out and sealed off by the right guard, losing his A gap responsibility. He completely turns himself around and out. That’s the gap Dobbins runs through, straight downhill with no resistance. From there, it’s just a matter of trying to save a touchdown. Minkah Fitzpatrick does and tackles Dobbins out of bounds. But the damage is done. Dobbins scores on the next play, giving Baltimore a 10-0 lead they wouldn’t give back.

While the blame shouldn’t be put entirely on Heyward, he’s the main culprit here and is the one guy who was out of his gap. One missed assignment is all it takes. Others could’ve done better, especially ILBs Myles Jack and Devin Bush, but they’re in the correct gap, even if they struggle to get off the block. Heyward is the track off the rails and that’s where Dobbins finds daylight.

On the day, there was a mixture of blame to go around. It’s an 11-man job to minimize the Ravens’ rushing attack and it’s an 11-man blame when you allow 215 yards. While this posts is most critical of Heyward, the overall blame will shift around, as I’m sure we’ll uncover later in the week.

To be fair to Heyward, he is not a nose tackle. He doesn’t like playing there, admitting it last season, and it’s not something he has a lot of experience doing. Pittsburgh desperately tried using him there last season after losing Tyson Alualu and getting nothing from Isaiah Buggs/Henry Mondeaux. He was playing nose tackle here as part of the Steelers’ stemmed front and it’s fair to question if that was the right approach to take. Stemming the front has been fruitful for Pittsburgh but they’re playing with three DEs/DTs on the field – Larry Ogunjobi, Chris Wormley, and Heyward, a curious decision not to have Tyson Alualu or Montravius Adams. Perhaps the Steelers were trying to play their best people. Alualu has not played well this year while Adams has been pretty quiet. But the cost of that was not playing guys in their best position and it’s one of several reasons why