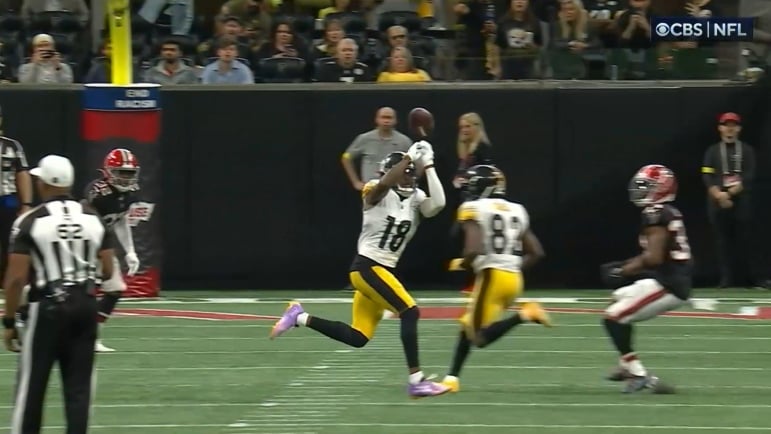 The Pittsburgh Steelers escaped Atlanta with another win on Sunday, pulling out the victory late 19-16. Pittsburgh took the lead early and controlled the first half of the game but saw the same second half inefficiencies hat have plagued them throughout the season continue in this one, managing to only score a field goal in the second half.

WR Diontae Johnson is in the midst of an inefficient season as well, catching 65 passes on 105 targets for only 565 yards (9.3 YPR) and zero TDs. He finished Sunday’s contest with five receptions on 11 targets for 60 yards. Through 12 games, Johnson has the most receptions in the league without a receiving TD, a stat that is obviously bothering Johnson who was paid to be Pittsburgh’s WR1 during training camp when he signed a two-year extension to stay with the Steelers through the 2024 season.

Johnson had his chances Sunday to reach pay dirt for the first time in 2022 but had a couple of miscues prevent him from capitalizing on the opportunities he had. In the first clip, we see Johnson get a little antsy at the LOS prior to the snap, jumping offsides and causes the team to back up five yards. Shortly after, we see Johnson get his end zone shot in the second clip at the bottom of your screen against #24 AJ Terrell. Johnson gets a step on Terrell, but Kenny Pickett throws the ball just behind Johnson, allowing Terrell to recover and get a hand in-front of Johnson to break up the pass.

Johnson had his issues throughout the game as you could visibly see the receiver’s frustration. That frustration has had a knack of getting into Johnson’s head at times, particularly in the form of drops. After rebounding from a dreadful 2020 season last season in the drop category, the issue has once again arose over the course of 2022. Here is one of Johnson’s drops in the contest, coming on a simple crosser over the middle where he is wide open, but lets the pass from Pickett slip through his fingers like a bar of soap in the shower.

Johnson’s second drop of the game comes on what appeared to be a fumble initially, but upon further review was ruled an incomplete pass. This is one instance where Steelers fans can be happy that Johnson dropped the ball as a fumble would have given the Falcons the ball deep in Pittsburgh territory with a chance to take the lead late in the fourth quarter. Instead, Johnson makes the catch, but can’t hold onto the ball long enough to complete the process of the catch before knocks the ball out, making the pass fall incomplete. This isn’t an outright drop by Johnson, but still a play that you need your #1 WR to make.

Johnson and Pickett have had issues connecting with each other throughout the season as the receiver has seen his targets become more volatile with Pickett under center compared to when mitch Trubisky started the season. However, Johnson has seen 19 targets in his last two games, suggesting that the opportunities are there. Still, there are opportunities being left on the field between Pickett and Johnson like this incomplete pass where gets a step on Terrell along the sideline at the bottom of your screen, but Pickett is a tad late to release the ball, allowing the safety to make his way over as Pickett throws that ball over Johnson’s head who would have needed to make an acrobatic grab to come down with the reception.

While Johnson had his issues Sunday in Atlanta, there were some positives to take from his performance. One of those positives is an awareness to get up field after the catch rather than attempting to run backward and try and rip off a big play in space. Johnson has been heavily criticized this season for trying to do too much as a runner after the catch with the ball in his hands given the fact that his is averaging the least amount of YAC as anyone in the NFL this season. However, Johnson did a better job taking what the defense gave him this week as you can see from these clips below of Johnson making the catch and shooting up field to pick up a couple extra yards.

Johnson also displayed his effectiveness as one of the best route runners in the NFL again on Sunday, generating separation out of his breaks on a couple of occasions like on this completion where Johnson is at the top of your screen. He gets into the cushion of Terrell who is in off-man coverage and quickly whips back to the ball on the deep comeback, making the catch along the sideline for the first down.

Johnson also makes this key completion near the end of the game over the middle on a slant concept and gets up field after initially running backwards to pick up the first down and extend Pittsburgh’s drive as they attempt to burn clock and move the ball into field goal range.

Overall, it was another disappointing game for Johnson who dealt with some inefficiency from his QB, but still had his own struggles prevent him from having a bigger impact in this one. While he was shadowed by Terrell for most of this contest, Johnson got the better of him several times throughout the game and had more opportunities if it wasn’t for a couple drops and a lack of connection with his QB.

Johnson’s poor 2022 season can’t be fully put on his shoulders as there is obvious disconnect between him and his quarterback as well as poor usage in OC Matt Canada’s system. However, the mental lapses, drops, and execution of creating after the catch have consistently plagued Johnson throughout the season, posting one of the most inefficient seasons by a WR in recent memory. For someone paid to be Pittsburgh’s WR1 and one of the best at his position in the league, Johnson simply hasn’t been meeting the bar when it comes to those expectations despite the rookie QB and being the opposing team’s focus in coverage.

Johnson would benefit from better overall play from Pickett as well as better usage in the offense, but he still needs to correct when he can to improve his efficiency and effectiveness for the rest of the season. It’s been a fall from grace for the 2021 Pro Bowler, but there is still time for Johnson to end the season on a high note in hopes of better results next season with Pickett another year older and a potentially new offensive system installed.

What are your thoughts on Diontae Johnson’s performance against the Falcons? Are the issues he faced throughout the game his fault, the fault of Pickett/the offensive system, or a combination of both? Do you think that he will get back on track yet this season? Please leave your thoughts in the comments section below and thanks again for reading!