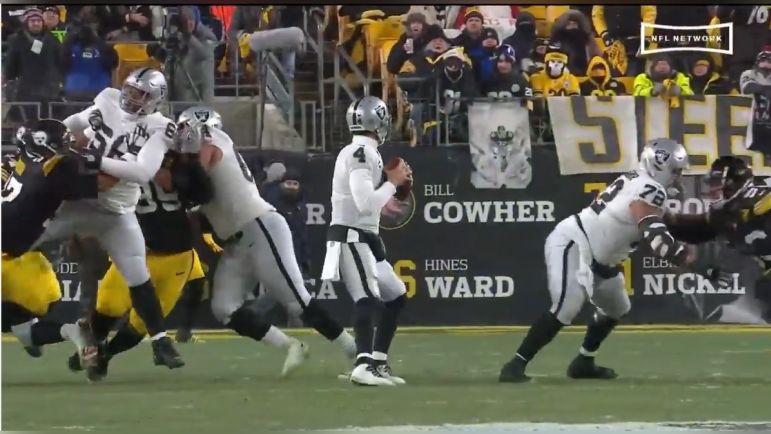 Cam Heyward is the rookie killer. He’s Freddy Krueger, showing up in rookie’s nightmares and always on the hunt. Try as you might, you have to confront him. And Saturday night, Heyward put on one heck of a horror show.

Later in the week when the All-22 comes out, I (or someone else) will do a deep dive into Heyward’s utter dominant performance. He made so many plays, big and small. But I’ll focus on two big ones, his two sacks, done the ‘ol Heyward way.

First sack is one of the gnarliest bull rushes you’re going to see. Just a straight forklift of Parham, lifting him up and into Derek Carr’s lap. Shed the block, if you can even call it that, and bring Carr down. Poor Parham got lifted up by Heyward like he was the woman in Grease and then taken out by Tyson Alualu. Insult to injury. Or injury to insult. I’m not sure which applies better here.

Now, I am breaking my own golden rule and it should be noted that it appears the LG Parham got hit inside/right foot tangled up with the center. That certainly hurt Parham’s ability to anchor and much like Terrell Edmunds’ pancake of Carolina Panthers’ LT Icky Ekonwu last week, the rush probably wasn’t *that* powerful.

But still, this is a rush of beauty and Parham is clearly on skates and out-leveraged even before any foot-to-foot contact with the center. And as he’s pushed back, check out the leverage has. Low man wins and oh boy, was Cam Heyward the low man. 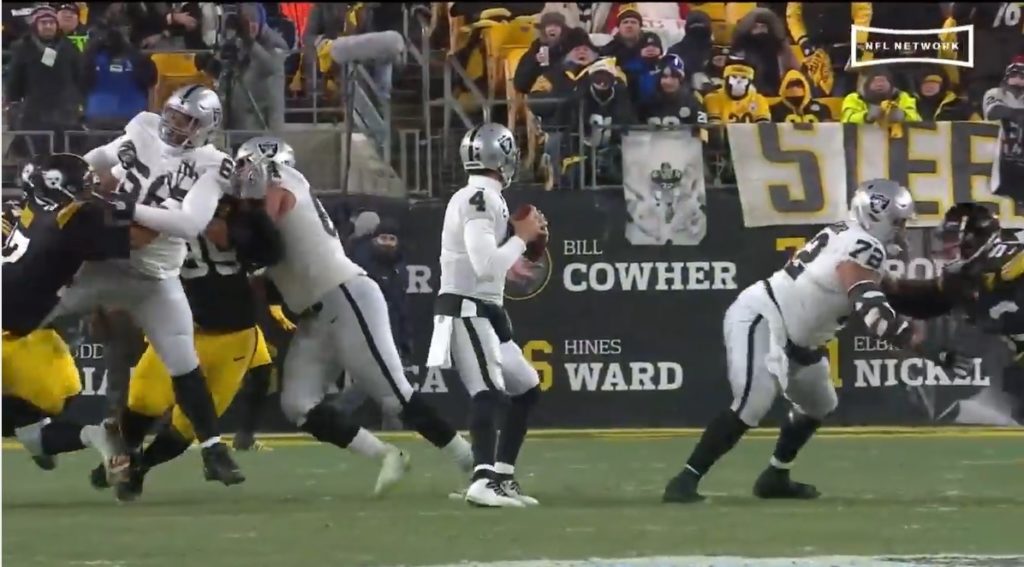 Now, if that was only that play alone, it probably wouldn’t make for a good headline or story. But Heyward’s bull was working all night and in the fourth quarter, he used it again to pick up his second sack. Not as gaudy but just as effective. Bull, collapse, shed, finish, cleaning up Minkah Fitzpatrick’s rush off the edge.

And that’s just a sampling of the great plays he made. It says nothing of his run defense, which was just as good, including a great rep on a four yard loss to put the Raiders in 2nd and 14, the needed splash plays to take the Raiders out of their run game. Josh Jacobs, entering the game as the NFL’s leading rusher, had his least efficient performance of the season. I always say that’s team run defense, it’s bigger than one man, but Heyward was the straw that stirred the drink.

And when the Raiders’ Dylan Parham closed his eyes Saturday night, he saw only one thing. Cam “Krueger” Heyward.