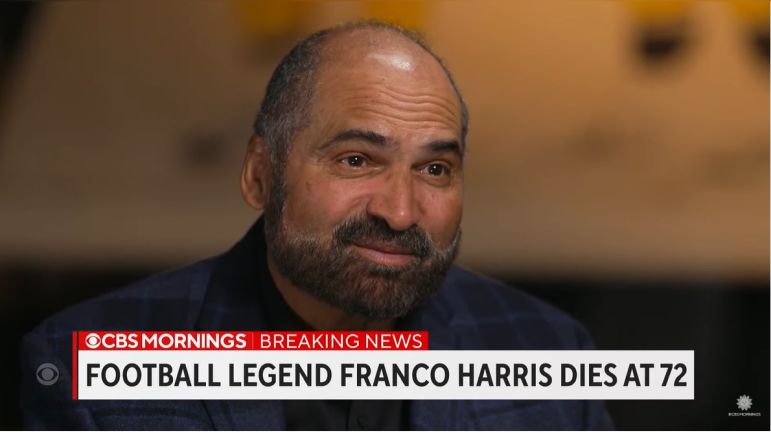 As many of you are now aware, Steelers’ Nation truly lost one of its brightest stars today with the sudden passing of Hall Of Fame running back Franco Harris at age 72. The Immaculate Reception, regarded by many as the greatest play in the storied history of the NFL, was his calling card, as well as helping lead the dynastic Steelers to four Super Bowl victories in the 1970s.

Sportscaster Chris Berman, around the sports world for as long as just about anyone, joined ESPN’s Get Up Monday Morning to talk Harris’ legacy.

“Franco, for all the superstars and you’ve met a ton, we all have, was about the most humble, decent, kind, giving, much more than this brute of a running back,” Chris “Boomer” Berman told host Mike Greenberg.
Berman went on to backtrack on his “brute” comment, saying Harris wasn’t necessarily that 260-pound, Jerome Bettis-type of Steelers back. But listed at 6-foot-2 and 230 pounds, he clearly made his mark, as his 11,950 yards rank first in team history en route to first ballot HOF Honors.
Berman’s next comment was goosebump-enducing  and surely resonates with a certain age group, those located in Western Pennsylvania who witnessed the physicality of those 70s Steeler teams.
“He on offense, epitomized the Steelers on defense, and the Steelers grit and really, the Steelers city.”
This Saturday was to be a grand celebration of Harris’ iconic play in which he snatched a ricocheted ball off of a hellacious hit from Raiders safety Jack Tatum on John “Frenchy” Fuqua, albeit without it hitting the ground, and running it back for the game winning touchdown in the AFC Divisional Playoffs on December 23, 1972.
Fast forward fifty years to the day. So many current Steelers players from the past were slated to be in town for the event, but not just to celebrate the play itself. Harris’ Number 32 was to be retired by the team, and amazingly enough, only the third to ever receive such an honor, including Ernie Stautner and Joe Greene. Berman echoed that statement, in astonishment.
“You shake your head and go ‘how is that possible?’ But if you think about it, if the Steelers retired all the numbers that they should, there wouldn’t be any left.”
His death no doubt will cast a cloud over the events scheduled for Saturday evening, but it’s clear to me, Berman, and all fans alike that Harris’ legend will live in forever in the Steel City.
“We’re all saddened because Mean Joe Greene and him, and of course Terry, all the great players they had, you think of the Steelers and you can not think of Number 32. You can not.”