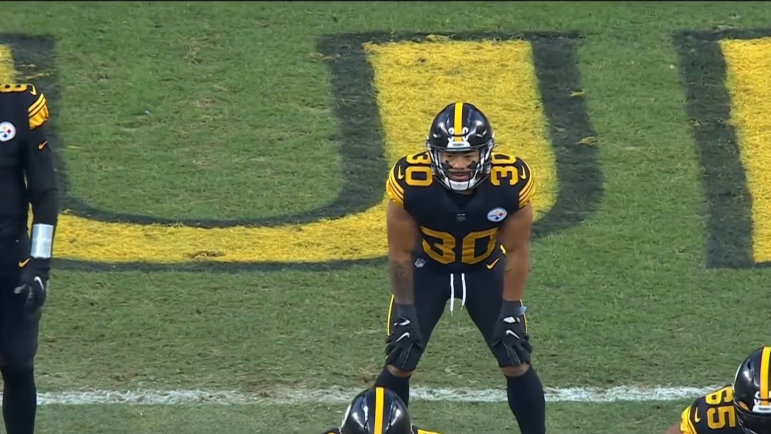 At 6-8 and almost mathematically eliminated from the playoffs, the Pittsburgh Steelers have not had much to be happy about this season. However, one player almost everyone in Steelers’ Nation is happy about is undrafted rookie running back Jaylen Warren.

In ESPN’s weekly power ranking article the subject attached to the ranking this week was each team’s “pleasant surprise.” For the Steelers, beat writer Brooke Pryor chose Warren as the Steelers pleasant surprise referencing how he has continued to earn more playing time.

“Although Najee Harris is still the Steelers’ primary back, the undrafted rookie free agent caught the coaches’ attention in training camp,” Pryor wrote. “He has followed with a solid season as a complement to Harris and the team’s third-down back. Warren had a career-high 11 carries and scored his first touchdown of the season against the Panthers on Sunday.”

Warren does not have amazing numbers on the season, carrying the ball only 53 times for 244 yards, but the reason he is such a pleasant surprise is due to how well he plays when he’s in the game and the number of snaps he has earned. However, while he does not have the best numbers he did just score his first touchdown on the season on Sunday against the Carolina Panthers after a long drive where Warren saw five carries and helped move the Steelers down the field.

Warren earned the role of the team’s third down back in Week Five against the Buffalo Bills due to his ability to pass block and his success in the receiving game. On the season, Warren has caught 21 passes for 178 yards and has an average yards per catch of 8.5 which is tied for seventh best on the team.

Since the Bills game, has seen an average of 33.3% of offensive snaps minus the game he got injured in against the Cincinnati Bengals. Prior to Week Five, Warren saw 27.75% of the offensive snaps per game. While not a huge difference, it is notable in the fact that head coach Mike Tomlin typically likes to primarily use one back. Back in 2014, the Steelers signed LeGarrette Blount to ideally split touches with second year running back Le’Veon Bell, but Tomlin forwent the idea of splitting touches, with Blount only seeing an average 17% of the offensive snaps before infamously walking off the field during a Monday Night Football game against the Panthers.

Given Tomlin’s history of not using back up running backs, the amount of snaps Warren has seen in only his rookie season is impressive. It leads to believe the the Steelers found a running back to is perfect to pair with Najee Harris and one that Tomlin is also willing to play. After a year where Harris saw 980 snaps last season and 381 touches, it is certainly a pleasant surprise that Pittsburgh found a back who can help relieve some of that heavy load Harris was carrying last season without using a draft pick.