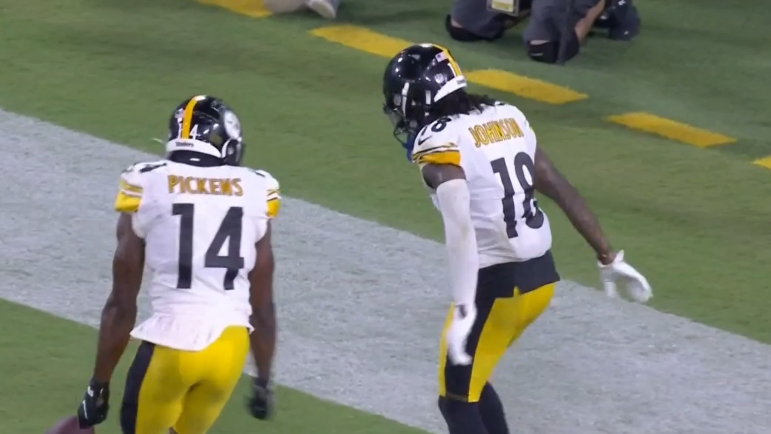 Last Sunday against Carolina, we may have gotten a glimpse of the future of the Steelers’ receiving corps. If you haven’t already, check out this week’s Steelers Turning Point article, where I outlined how George Pickens’ big-play ability changed how Carolina viewed their cornerback matchups.

After Pickens had two catches for 53 yards, the Carolina Panthers switched their number one cornerback Jaycee Horn to cover him for the entirety of the second half. From that point on Diontae Johnson dominated catching seven of his last seven targets, many in key spots, and ultimately was a big reason the Steelers were able to close out the game. While Pickens was held without a catch in the second half.

I’m not sure there are many teams that would have kept on with this matchup as Johnson nickeled and dimed them down the field continuously. However, it certainly made me excited to think about the future of this group.

Pickens is seen by some as a number-one receiver, but he hasn’t yet passed Johnson for that spot. Not being able to generate a catch in the second half against the team’s top corner gives a glimpse of why that is the case. Whether it’s on Pickens, the offense, or the quarterback, we haven’t yet seen if Pickens can be that consistently dependable guy for this offense. In all of 2022, he’s only had four games this season with more than three catches. He’s done well with the targets he’s been given, but it doesn’t seem like the quarterbacks are comfortable yet with giving him the football. A large part of that is due to his lack of separation from defensive backs.

Pickens has proven on tape that he’s still an extremely raw route runner, and that is one of the few things holding him back to be that number-one guy heading into 2022. However, with his high catch rates and his ability to go up and get the deep ball, it’s easy to see that he’s on the trajectory to take that top spot and be the alpha in the wide receiver room.

All this to say I wonder if what we saw Sunday in Carolina is something we should get used to.

If Pickens continues to develop into a true number-one WR, teams will have to respect him as such, leaving Johnson to draw the team’s second and third corners. Johnson is already one of the hardest wideouts to cover in the NFL, with a top-five “open score” from ESPN. If he starts to be able to test the depth of the team’s cornerback position, things could start to get ugly real quick as we saw Sunday with him running rampant on defenses.

It's almost impossible to cover Diontae Johnson 1-on-1.

A big reason for that is he's mastered manipulating leverage at the top of his route.

His simple inside stems before breaking out turn defensive backs around constantly. Got two Panthers on the same drive Sunday. #Steelers pic.twitter.com/SC1e6r4i4Q

The question here lies, where does this leave Diontae Johnson?

I’ve been one of the bigger Johnson supporters and continually see through the name-calling and bashing of his game because it’s hard not to say he’s one of, if not the best talent, currently on this offense. He has all the ability to be a number-one receiver in this league, but he’s far too much of a roller coaster. Every time he seems to be turning the corner and at the top of his game, something happens and it snowballs for him. Then, it takes a while to build up momentum again and get on track.

Right now, Johnson is playing some of his best football, but even Sunday, when he dominated, he loses his head and touches the onside kick before it reached ten yards, only to be saved by none other than Pickens.

It’s a big reason why the Steelers gave him a contract that did give Johnson a significant pay raise, but didn’t necessarily break the bank for the team.

His $18,355,000 average per year puts him 17th on the list of receivers in the NFL and that will only get lower as more guys get paid this offseason with bigger deals and more salary cap space. That’s why it hurts my head to see so many Steelers fans complain about his contract. Looking at other WRs that are around his same money per year average, there are a ton of guys that aren’t number-one receivers for their teams, guys like Allen Robinson, Mike Wiliams, Robert Woods, and Hunter Renfrow.

And right now in 2022, whether you believe it or not, you’re getting a bargain for a number-one wide receiver in the NFL.

I think we could start to see the offense moving in the direction of Diontae Johnson being a WR2 in this offense. The team has already started to move Johnson around more to draw favorable matchups for him that are easy to win. If opposing defenses start to view Pickens as “the guy” that draws their top corner, those favorable matchups are going to become even easier to come by.

The pressure then comes off Diontae Johnson and onto the soon-to-be 22-year-old Pickens who needs to mature into leading this offense. I don’t think there will ever be a true “crowning ceremony” of WR1/WR2, but if opposing teams are already choosing to put their top guys on Pickens the transition is already slowly happening.

This may have been the plan all along for General Manager Omar Khan when giving Johnson money that stacks up with WR2s in the NFL and drafting Pickens at 52. If Mike Tomlin and the Steelers can manage the personalities of these two, I see it being a very productive mutually beneficial relationship between Johnson and Pickens in 2023 and beyond.