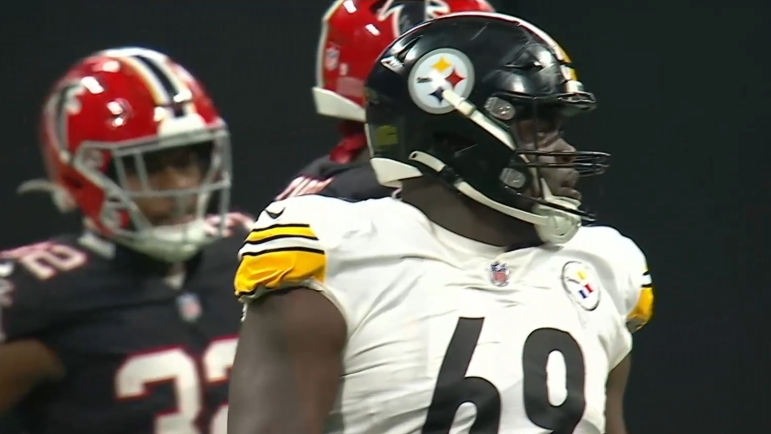 Week after week, the offensive line for the Pittsburgh Steelers continues to get better and better.

After coming under first heavily in the preseason from the media and fans for the lackluster performance overall, as well as some early-season struggles, the starting five in the trenches for the black and gold has gelled at the right time and is playing some good football overall, helping lead the Steelers to wins in three of the four games after the Week 9 bye.

Good eyes by Dotson to see it and win the rep. #Steelers pic.twitter.com/I25H1B9Jeh

Currently, the Steelers remain at No. 23 overall, behind the likes of the Washington Commanders, Los Angeles Chargers and Indianapolis Colts outside the top 20.

“Pittsburgh’s line ranks eighth in PFF pass-blocking efficiency over the season, allowing 104 pressures across 481 pass-blocking snaps,” according to PFF’s Sam Monson, who writes the weekly offensive line rankings for PFF. “Dan Moore Jr. was the only member of the line to allow more than one pressure against Atlanta’s weak pass rush in Week 13.”

Wow, what a duo here by Mason Cole and Kevin Dotson on Grady Jarrett. Talk about getting a surge off the LOS. #Steelers pic.twitter.com/O0v9o3XRe1

While the Falcons’ front seven is not much of a threat from a pass rushing perspective, it was great to see the Steelers dominate in a matchup that they absolutely needed to. Rookie quarterback Kenny Pickett was kept upright throughout the game on 28 drop backs.

On top of keeping Pickett clean, the Steelers won the line of scrimmage in the run game over and over again. Najee Harris rushed for 86 yards on 17 carries, while Benny Snell Jr. added 18 yards on six carries as the Steelers largely dominated up front throughout the game.

Riding high after some strong play in the last month or so, the Steelers will be facing tough test on Sunday at Acrisure Stadium against the Baltimore Ravens, led by Calais Campbell, Roquan Smith and Patrick Queen.

What a recovery here by James Daniels on the A-gap blitz. Loses rep initially with penetration, but does a fantastic job to get square to the blitzer quickly with good footwork, loose hips.

“The Ravens rank third in the league against the run, allowing 3.8 yards per attempt. They are a below-average pass-rushing unit,” Monson writes regarding the Ravens’ defense.

It might be tough sledding on the ground for the Steelers on Sunday at home, but there’s a good possibility that the Steelers will be able to throw the ball with much success against Baltimore, keeping Pickett upright in the process as the offensive line continues to show steady progress under first-year offensive line coach Pat Meyer.