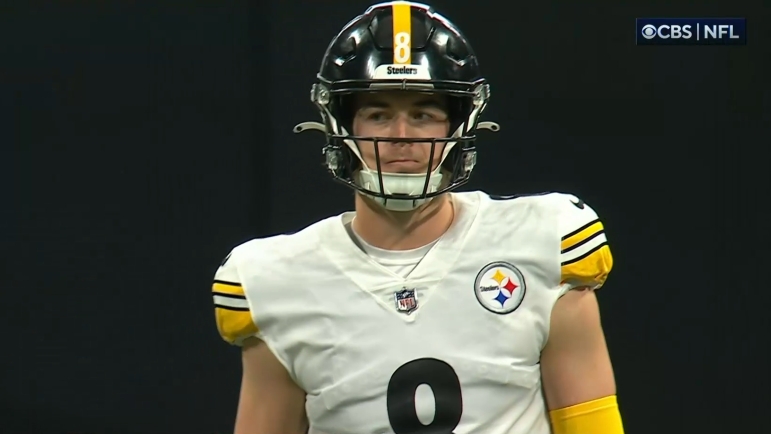 In suffering two concussions, Pittsburgh Steelers’ first round rookie quarterback Kenny Pickett has now missed over two games of play time. He is set to return on Saturday against the Las Vegas Raiders, and these last few games will be crucial for the team in seeing what they have in him. During a Thursday press conference, the team’s offensive coordinator Matt Canada was asked about potential schematic changes to limit the threat of injury, to which he gave a hard no according to 93.7 the Fan’s Jeff Hathhorn on Audacity.com.

“Great faith in the process of what we do,” Canada said. “I don’t think we can play like that, either we go or not go. The injury occurred on a drop back when we had a missed assignment. I don’t think there is a big difference there.”

We broke the sack down after it happened, assigning blame on Kevin Dotson for the missed assignment Canada is referring to but also noting issues with the scheme that put the line and quarterback in tough situations.

Film Room: How Kenny Pickett Was Injured (And How The Steelers Keep Falling Into The Same Traps)

Pickett’s scrambling is a key part of his game regardless of scheme. He currently has 225 yards and three touchdowns on 44 carries in 10 games, which ranks third on the team. In his last year at Pitt, he had 241 yards and five touchdowns on 94 carries.

Pickett’s rush attempts have come mostly on scramble plays. According to PFF’s premium stats, 26 of his rush attempts are scrambles, while only four are designed zone/gap rush attempts. As such, it is fair to assume that the scheme and play calling seldom put him in harm’s way. Notably, this was also the case for Pickett last season, as he had 12 designed runs compared to 50 scrambles.

“It’s easy to say that, he’s a real competitive guy,” Canada continued when asked if it would have been better for Pickett to throw the ball away. “He shook the guy off and he’s going to try and make a play. Yes, I wish he would have gone down knowing what happened. You can’t ask him to do that.”

Pickett’s first concussion against the Tampa Bay Buccaneers came on a hit after he threw it in the pocket, while the second against the Baltimore Ravens came after he broke a sack. It is hard to blame Pickett for either play, as the former could have happened to any quarterback, and the latter was a case of him trying to extend the play.

Dating back to the offseason, head coach Mike Tomlin has touted the value of quarterback mobility. This is a component that the team clearly wanted in a quarterback, and it’s one they got with Pickett. Injuries can happen to any quarterback, especially younger ones seeking to prove themselves. If Pickett turns out to be the team’s franchise quarterback, he may adjust his play style to ensure longevity as many greats such as Eli Manning and Tom Brady have.