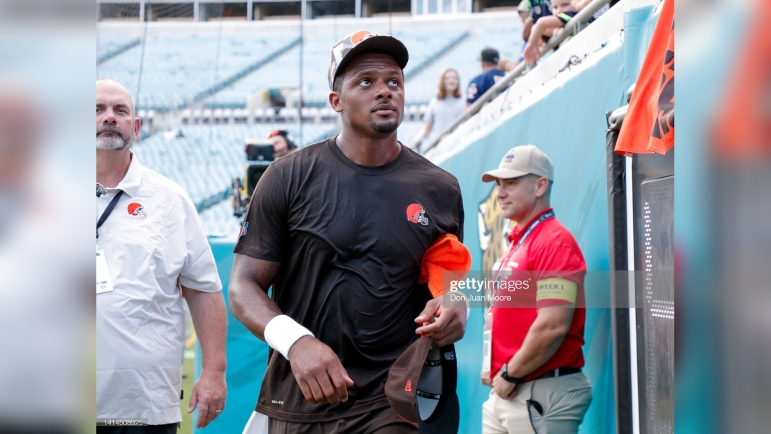 The Deshaun Watson era in Cleveland officially begins today with the beleaguered quarterback set to make his much-anticipated return to the football field since he was accused of sexual harassment or assault by dozens of female massage therapists whose services he sought.

Having faced a litany of lawsuits, the shadow of his potential legal woes hung over his future for the past year, a former three-time Pro Bowler for the Houston Texans. But that show still looms even today. Even though nearly all of his accusers ultimately accepted settlements for their complaints, many will be in attendance as his Browns serve as guest to the Texans.

“Some of my clients asked to go”, said attorney Tony Buzbee, representative of the majority of the women who sued Watson, in an email to Mark Maske and the Washington Post. “They thought it [was] important to make clear that they are still here and that they matter. I was proud of them for that. I have made that opportunity available to them. I haven’t been to a Texans game in many years. But because they are going, I will go too”.

The fact that they will be there doesn’t really mean much aside from the fact that it will be a part of the story for the game. But the accusations of his illegal and criminal sexual exploits were always going to be front and center.

After all, the only reason he hasn’t taken the field is because he was serving an 11-game suspension because of it, in spite of the fact that no criminal charges were ever filed against him. The league found the evidence of the women credible enough to believe at least a sampling of their stories.

Cleveland traded three first-round draft picks, among other lesser assets, to the Texans in order to acquire Watson via trade earlier this year. equally significantly, they gave him a fully-guaranteed five-year contract worth $230 million, an unprecedented deal.

In his absence, the team went 4-7 with Jacoby Brissett under center, defeating the Carolina Panthers, the Pittsburgh Steelers, the Cincinnati Bengals, and most recently, coming off of an overtime victory against the Tampa Bay Buccaneers. Outside of the Bengals, all of those teams are below .500 on the season.

Beyond today’s game in Houston, the Browns still have one more game each against their divisional opponents, Cincinnati up next a week later followed by the Ravens after that. They play the Steelers in Pittsburgh in the finale, and in between face the New Orleans Saints and the Washington Commanders.

His accusers will not personally be in attendance for each of those games, but they will be a part of the story every time he takes the field, perhaps for the rest of his life. And that’s a decision that the Browns accepted back in March. They hope the rewards will come on the field, beginning now.